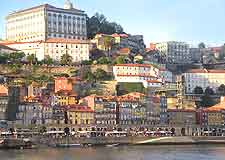 Famed for its rich port wine and riverside hills, the northerly city of Porto features everything from medieval alleys to the remains of Roman city walls and fortresses. Porto also offers a number of rather Parisian-style plazas, magnificent churches and a rather enchanting atmosphere.

Although much of the Porto area comprises history, vast vineyards and beautiful scenery, the city itself has much to offer younger tourists, with the balmy summer evenings seeing crowds regularly partying along the banks of the meandering Douro River (Rio Douro), as it winds its way through the city centre, passing the appealing Massarelos and Ribeira districts. 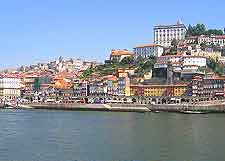 Many leading tourist attractions and shops in Porto and to be found off the Avenida dos Aliados, the Rua Santa Catarina and also the Rua Clube dos Fenianos, which is where the city's main tourist information centre (tourismo) is located.

This tourism outlet is easy to find, standing opposite the Camara Municipal and is home to the Loja da Mobilidade (Mobility Store), where English-language versions of the Guia de Transportes guides are available.

The inviting river front Ribeira area of Porto is a good place to start your sightseeing experience and cruises are available along the Douro, in traditional boats once used to ferry port wine from the vineyards. River cruises run every hour during the summer months and generally last around 45 minutes, departing from ports such as the Cais da Ribeira. 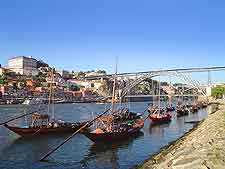 Close by, be sure to bring your camera and check out the rather splendid 12th-century Porto Cathedral, which enjoys a hilltop location and resembles a fortress, being just a short walk from the Praça da Ribeira. Nearby and close to the Avenida dos Aliados, tourists should head to the Torre dos Clérigos, a notable tower boasting exceptional views. More information about Porto Tourist Attractions and Landmarks.

Porto could hardly be considered to be a leading museum city although it does provide plenty of interesting museums for most tourists. These include the Museu Nacional Soares dos Reis and the Museu de Arte Contemporânea, two leading galleries. For information about the much-loved local tipple, head to the Museu do Vinho do Porto, otherwise known as the Port Wine Museum and located along the Rua do Monchique, where the history of this rich wine is explored with a series of interactive displays. More information about Porto Museums and Art Galleries. 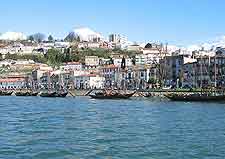 Although there are plenty of tourist attractions situated close to Porto, a number of these are really quite seasonal, such as the sandy beaches around both Matosinhos and Vila Nova de Gaia. Further beaches lie around both Praia da Barra and Costa Nova, and these areas have become leading surf spots, attracting large crowds during the sunny summer months. Notable towns close to Porto include Amarante, Vila do Conde and also Aveiro, which is regarded by many as a Portuguese version of Venice, since it contains such a big number of pretty canals and historical bridges. More information about Porto Attractions Nearby.