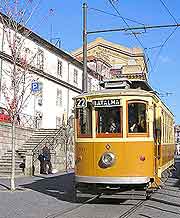 The Francisco Sa Carneiro Airport is the largest air facility in the northern region of Portugal. Serving the metropolis of Porto, the airport handles more than six million passengers per annum. The airport is modern and stylish, and is easily capable of accommodating more travellers than its current throughput.

The terminal has recently been given a facelift, so visitors will be in awe of the structure that greets them. Only beaten in aircraft movements and passenger numbers by Lisbon's international airport, the facility still manages to host more than 60,000 flights a year on its single runway.

Porto's air facility is a notable hub for Ryanair. However, the city is also a major focus destination for TAP Portugal, which provides numerous flights a day from the terminal. Both EasyJet and SATA International are further airlines of note, offering regular daily flights to several different cities across Europe.

Address: Rue Hotel Pedras Rubras 99, 4470 Maia, Porto, Portugal
Tel: +351 229 432 40
The Francisco Sa Carneiro Airport is only 11 km / 7 miles to the north of Portugal's second largest metropolis, Porto. The facility is linked to the busy A28 (Auto-Estrada Porto-Caminha) via the N-107. This route enables passengers to connect directly with the heart of Porto. The city of Maia is only 6 km / 4 miles to the east of the airport, being reached via the IC-24, while Matosinhos is to be found a similar distance to the south.

The best way to reach the airport or downtown area is along the A41. This route connects to the A23, which eventually links up with the A3. These roads enable visitors to get into the centre of the city quickly and easily. Several other municipalities are within close distance by car, including Braga, Chaves, Guimaraes and Vigo.

Whether passengers want to reach a specific hotel or just get to the downtown area of Porto, several bus transportation options are available. Shuttle GOIN' Porto is a cheap and easy shuttle service to the downtown districts. Resende Buses, in particular Line 120, take passengers to spots like Santa Cruz and Matosinhos. STCP Lines is yet another popular bus company, offering links to central Porto and other destinations.

The violet line of Porto's metro is the train link that exists between the airport and the CBD. These metro trains run from the airport between the hours of 06:00 and 01:30. Several city centre stations are served, such as Dragao Stadium, Cada de Musica and Trindade.

Taxis are another possibility for passengers. Not only are they a reliable way to reach downtown Porto, but they are also reasonably priced - although it is worth noting that travelling via the motorway will incur a fee that needs to be paid by passengers. All taxis have meters, so tourists know exactly how much they will be paying by the end of the journey.