Dusseldorf International Airport is the largest and busiest gateway to Germany's North Rhine-Westphalia region. Accessible via underground transportation from central Dusseldorf, it handles a whopping 20 million+ passengers each year and is continually growing. This makes it the third-busiest air hub in Germany, behind the main airports at Frankfurt and Munich.

Despite there being three terminals here, passengers will notice that the design is more like three concourses linked by a central hall. Of note, the facility is capable of handling the world's largest aircraft.

Terminal A serves flights from Lufthansa and its partner airlines. Sky Team and One World airlines fly out of Terminal B, while Terminal C operates long-haul, non-Schengen flights.


Eurowings, Lufthansa, Air Berlin and Germania are the major air carriers using this facility as a hub, along with German Sky Airlines. By far the busiest operators are Eurowings, Lufthansa and Air Berlin, although plenty of low-cost airlines are beginning to increase their services here, such as TUIfly. Flights to Asia, the Americas, Africa and other European destinations are available from the airport.

The airport is conveniently connected to the A44, which is the city's largest and busiest autobahn. It takes motorists only 20 minutes to reach the international airport from the centre of the city when taking the Nordilcher Zubringer all the way to the A44, following the well-signed route to the airport turnoff. Drivers will do a 'half-loop' on the A44 when they travel along this route.

There are bus stops for the regional bus service located outside each of the terminals. However, there is also a bus station outside the train station serving Terminal C. Passengers can travel to destinations throughout Dusseldorf and Essen by bus.

There are two train stations available. The S-Bahn train station is part of the city's underground train network and is situated below Terminal C. Stations connected by the S-Bahn include Dusseldorf Zoo and the Central Station.

A long-distance train station is found about 2 km / 1.2 miles from the terminals. This facility provides regional connections to places outside of Dusseldorf. The SkyTrain service operates between the airport's rail station and the terminal, with the two end stations being just over a six-minute journey from each other.

Tel: +49 211 33333 / +49 211 212121
Taxis are a renowned transportation option from the airport, as they are always waiting for passengers outside Arrivals. It is possible to call and order a taxi prior to landing, but wait lines are usually short. Taxis can reach an extended area around Dusseldorf, including the centre of the city, as well as the suburbs of Dormagen, Duisburg, Essen, Hilden, Kaarst, Kreveld, Meerbusch, Neuss, Ratingen and the Trade Show Center. Popular companies offering service here include Rhein Taxi. 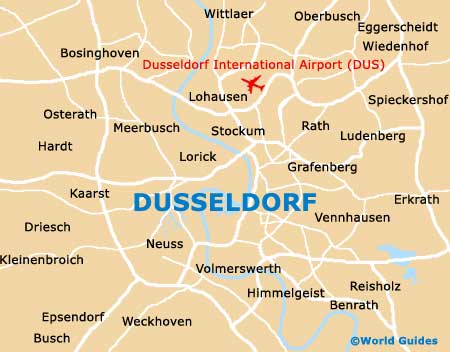