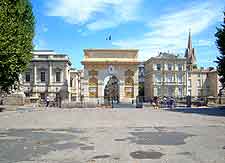 There are so many historic sites on offer in Montpellier, that there's certainly no shortage of things for visitors to see and do during their stay. A stroll around the city of Montpellier also reveals some interesting landmarks and monuments, which celebrate contemporary architecture and innovation within the city.

Local landmarks of particular interest are the city's own tribute to the Arc de Triomphe in Paris, a 17th-century aqueduct and the numerous private mansions scattered throughout the Old Town of Montpellier. 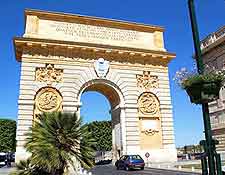 In Montpellier's famous Place de la Comédie is the city's own version of the Parisian Arc de Triomphe, a famous and much-loved iconic landmark. Built at the end of the 17th century, it was intended to celebrate the French monarchy of the time. It is possible to gain access to the interior of the monument. A staircase leads to a rooftop terrace, giving great views over the cityscape.
Open hours: daily
Admission: free during Heritage Days in September

Address: 2 Rue Philippy, F-34000 Montpellier, France, FR
Tel: +33 04 67 60 82 42
Visible on the skyline of Montpellier is the steeple of the Church of Sainte Anne. This almost fairytale tower rises impressively from the narrow streets below. The church itself is no longer used for religious worship. Today, it houses contemporary art exhibitions which are open to the public.
Open hours: Tuesday to Sunday - 13:00 to 18:00 (gallery only)
Admission: free 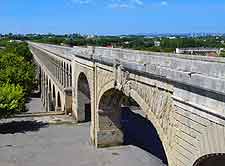 This 17th-century aqueduct was built originally to supply water from the St. Clement spring some 14 km/ 9 miles away from Montpellier. Its impact on the city was also to enable several fountains to be built. In the shadows of the aqueduct is the 'Les Arceaux' district of Montpellier, named after the arches of the bridge itself.
Open hours: daily
Admission: free 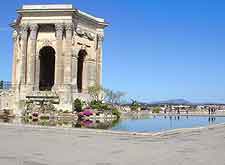 This 300-year old promenade has two tiers of terraces from which to admire the splendid views of the nearby Pic Saint Loup and even the Cevennes on clear days. The promenade was originally created as a venue for the city's festivals.
Open hours: daily
Admission: free 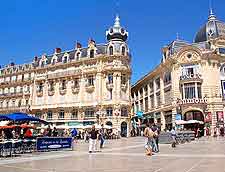 Place de la Comédie, or 'L'oeuf' as its known locally, lies at the heart of the Montpellier and is one of the main historical landmarks in this part of the city. Created in the 18th century, this lively square is now fully pedestrianized. At its centre is the Fontaine des Trois Graces, sculpted by Etienne d'Antoine. With its many cafes, this is a great place to meet, eat and generally have fun.
Open hours: daily
Admission: free

A tour of Montpellier's grand private mansions reveals the wealth of the city at the time of their construction in the 17th and 18th centuries. Noblemen and wealthy merchants built around 100 such luxurious dwellings, known as 'hôtels particuliers', in the centre of Montpellier. Characterized by huge gated entrances, spacious interior courtyards, and grand stone staircases, these mansions are not generally open to the public. However, a small number can be explored on guided tours organized by Montpellier's Tourist Office. Otherwise, there's plenty to admire from the outside. Just look out for the identifying plaque on the front of each building.
Open hours: guided tours only (Tourist Office)
Admission: free