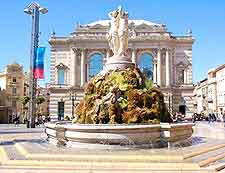 Montpellier is fortunate in having a long-standing tradition of staging artistic, cultural, sporting and musical events throughout the year. Through such a busy programme of festivals, concerts, fairs and other performances, Montpellier retains its status as a thriving modern city.

The city's most popular events tend to take place during the summer, when thousands are attracted to the festivities on offer.