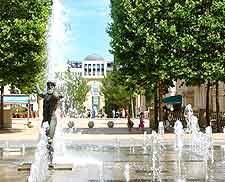 Montpellier is divided into administrative districts, as is the case with all French cities. However, the city is perhaps best navigated by way of more informal boundaries and areas.

At the heart of Montpellier lies the Place de la Comédie. To the west of this is Montpellier's historic town. The modern Antigone District is located to the east, as is the Polygone shopping complex. To the north is Montpellier's large university campus are various related neighbourhoods, where both accommodation and restaurants are plentiful. Encircling the old city are wide boulevards, beyond which lie Montpellier's residential neighbourhoods and other notable locations. 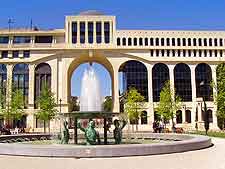 South-east of Place de la Comédie lies an example of French urban redevelopment. The neighbourhood of Antigone comprises of flats, offices, hotels and shops, all created as part of a project in the late 1970s and originally the brainchild of Catalan architect, Ricardo Bofill. Aimed at regenerating this district in Montpellier, it's worth heading out of the historic district of Montpellier for a closer look. 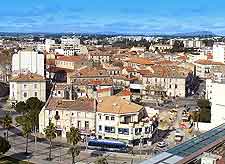 Often referred to as the 'Ecusson', the old walled town and historic district of Montpellier is a maze of narrow lanes, bordered by historic buildings, churches and courtyards. This is the perfect place to wander as traffic is restricted, and the neighbourhood boasts a wealth of shops, bars and restaurants. Of the Old Town's former ramparts, only two of the original towers have survived.

Situated around the old town are the central districts of Montpellier. These include residential neighbourhoods, such as Beaux-Arts and Boutonnet, Les Arceaux, Figuerolles and Rondelet. Modern apartment blocks mingle with large 19th-century houses. These districts of Montpellier are known for their lively multicultural atmosphere and are a good place to explore in search of markets, restaurants and bars that are off the beaten track.

To the north of Montpellier are the city's university and hospital districts. These neighbourhoods are also home to many of the city's green spaces, including the Bois de Montmaurand, the Zoo de Lunaret and the Parc Agropolis.