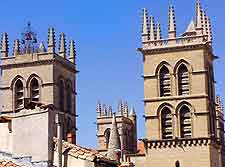 Montpellier is a cosmopolitan city that never fails to attract visitors, thanks to its vibrant atmosphere, popular tourist attractions, rich heritage and innovative architecture. Montpellier has a huge student population, amounting to a quarter of the total population of the city, all of which adds to its vitality.

Montpellier's growing popularity as a holiday destination can also be explained by the wide variety of tourist attractions on offer. From historic mansions and religious buildings to horse-drawn carriage rides and family entertainment, there's plenty to keep the whole family amused. 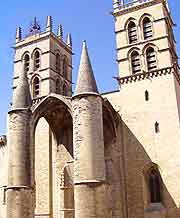 Address: 6 Bis, Rue Abbe-Marcel-Montels, Montpellier, France, FR
Tel: +33 04 67 66 04 12
Montpellier's Cathédrale St. Pierre is most notable for its twin church towers, an oversized 15th-century porch and its recently restored 19th-century stained glass windows. The cathedral is one of the city's most notable attractions and the interior boasts a memorial to a former bishop of Montpellier, who took the side of rebellious vineyard workers in the early 20th century. Look out, too, for evidence of shots fired by Royalist troops in 1815.
Open hours: daily - 09:00 to 12:00 and 14:30 to 19:00
Admission: free

Address: 2235 Route de Vauguières, Montpellier, F-34000, France, FR
Tel: +33 04 67 65 72 01
This Château de la Mogère was renovated back in the 18th century and also comprises an English park and French gardens. The interior of the château displays some fine furnishings dating from that period, as well as souvenir objects and other attractions brought back to Montpellier by the château's previous inhabitants.
Open hours: daily, June to September - 14:30 to 18:30; Saturday, October to May: 14:30 to 18:30
Admission: charge, discounts for children 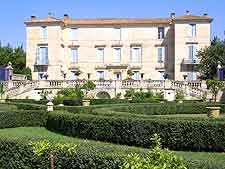 Address: 1744 Avenue Albert-Einstein, Montpellier, F-34000, France, FR
Tel: +33 04 67 65 51 72
Located just a short distance from the centre of Montpellier, this grand 17th-century château houses a collection of furnishings, art, and even optical instruments. The house is open for viewing during the summer. Nearby, the surrounding estate land is home to the château's Coteaux de la Mejanelle vineyard. The estate's wine can be tasted and purchased on site.
Open hours: Monday to Saturday - 09:00 to 12:00 and 14:00 to 19:00 (park); for tours of house, telephone for opening hours
Admission: charge 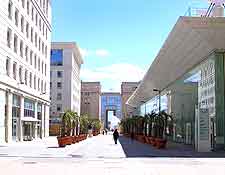 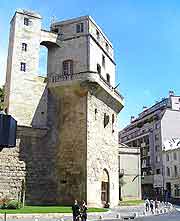 Address: Boulevard de l'Observatoire, Montpellier, F-34000, France, FR
La Tour de la Babotte is one of two towers that survive from a time when Montpellier was encircled by ramparts. Some 26 metres / 85 feet in height, the tower has since been used an observatory in order to study a total eclipse of the sun. Various modifications over the years include the opening of the lower gateway at the end of the 18th century. The tower is still used today by astronomers in the region. The interior of the tower is not open to the general public.
Open hours: daily (exterior only)
Admission: free

Address: Esplanade Charles-de-Gaulle, Montpellier, F-34000, France, FR
Tel: +33 04 67 60 60 60
They may be an old-fashioned way of getting around Montpellier, but they never cease to lose their charm. Horse-drawn carriage tours operate between the Esplanade and the Promenade du Peyrou. The carriage drivers are a good source of local knowledge and of Montpellier's many tourist attractions and popular sights.
Open hours: daily, February to November - 11:00 to 23:00
Admission: charge