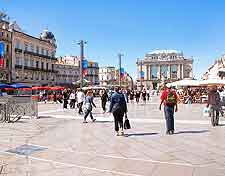 Montpellier has a number of centrally located shopping areas, each with its own particular attraction. Together, they offer a good selection of shops, including chic boutiques, independent and specialist shops and larger chain stores.

The vast Polygone shopping centre is very popular and meets most daily needs of Montpellier's visitors. However, it's also worth heading outdoors to one of many different markets around Montpellier, which offer everything from fresh fruit and vegetables to gifts and bric-à-brac. 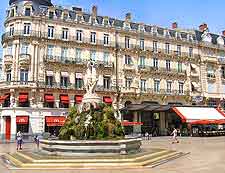 Most shops in Montpellier open Monday to Saturday and are closed on Sundays. Shops tend to open later than you'd usually expect, close for lunch, and then stay open longer during the evening, generally until about 19:00. Chain stores and supermarkets usually stay open throughout the day.

If you're planning to splash out on something special, then the best shopping to be had in Montpellier is in the city centre. Around the Place de la Comédie, particularly in Rue de la Loge, are a wealth of chic boutiques. 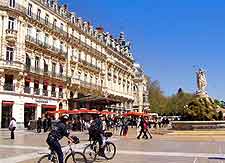 Alternatively, visitors can head to the nearby Polygone. This modern shopping centre is home to a number of well-known French chainstores and department stores, including Galleries Lafayettes.

If you're looking for something a bit different when you're out and about shopping, then Montpellier has several markets. These include a bustling flea market, which is held every Sunday morning and sells an eclectic mix of objects. A farmer's market is held every Sunday in the Antigone District, on Avenue Samuel Champlain. Les Halles Castellane in Rue de la Loge and Halles Laisaac on Rue Anatole France are both indoor markets and sell a wide range of food and drink.