A city of culture, museums and art galleries, Paris is also very much the capital of the French sports scene, with a number of the biggest and most important sports stadiums in France. One of the most central is the multi-use Stade Sebastien Charléty, which dates back to 1939 and is located within the 13th arrondissement, where it can accommodate some 20,000 spectators.

Sited on the south-western side of Paris, the Parc des Princes is a leading football stadium, built in 1897 and boasting a seating capacity of just under 50,000 spectators. Within the neighbouring commune of Saint-Denis, the Stade de France is currently Europe's fifth-largest, while elsewhere, other notable sports stadiums include the Stade Olympique Yves-du-Manoir in nearby Colombes and the Vélodrome Jacques Anquetil (La Cipale) in Vincennes.

The Vélodrome stands on the easterly outskirts of Paris, being used to stage the Summer Olympic Games of both 1900 and 1924, and now plays host to cycling races, as well as rugby and football matches. 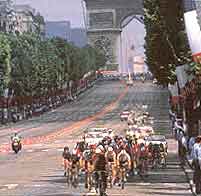 With over 60 miles / 100 km of cycle lanes in the city, cycling in Paris is becoming a popular and convenient way to travel around. Free leaflets detailing all cycle routes are readily available from town halls, tourist information offices and also bicycle rental shops. Bikes can be rented either by the hour, day, weekend or week, but if you want a bike on a Sunday, it is often best to reserve one in advance. Some bicycle rental shops also offer excellent half-day cycle tours, covering a variety of different routes.

Towards the end of June, the route of the grand finale of the Tour de France runs along the quais of the Rive Droite, before eventually crossing the finishing line on the Champs Élysées.

Gymnasiums are very popular throughout Paris and most offer aerobics classes, dance workouts and a variety of fitness programmes, as well as yoga, martial arts and T'ai Chi lessons. Many also have saunas, solariums and Turkish baths (hammans), which are more luxurious versions of the traditional Swedish sauna.

There are many municipal and privately run swimming pools in Paris. Municipal pools are often closed at set times during the week, so that nearby schools can have exclusive use of the facilities, meaning that you should always consult the timetables beforehand. Most are closed all day on Monday. Privately run pools tend to be twice as expensive and some have wave machines or water slides, and they are often part of vast sports complexes. 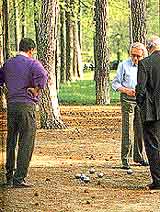 This classic French game is played throughout Paris and there are many areas to play dotted around the city's parks, plazas gardens, often rough or covered in sand. This is a very social game and is played with metal balls and a wooden marker.

Those visiting Paris and keen on jogging will find numerous parks with suitable pathways, such as the Jardin du Luxembourg. These provide varied runs and are ideal, as most of the pathways are fairly flat. If you are jogging along the pavement, take great care of the traffic.

The Paris Marathon is held every May and starts at the Place de la Concorde. This is a hugely popular sporting event in the city and is watched by sizeable crowds of cheering people. There is a shorter running race that takes place in October - Les 20km de Paris, which starts and ends at the famous Eiffel Tower. 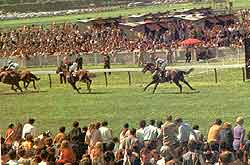 The Prix de la République and the Grand Prix de l'Arc de Triomphe are the biggest horse races in Paris. They are held on the first and last Sunday in October at Auteuil and Longchamp. At the end of June there are many big racing events at these venues and also at St-Cloud and Chantilly.