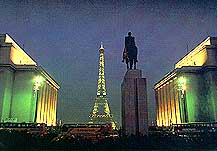 The salutation 'Bonjour' should be followed by a either 'Monsieur', 'Madame', 'Mademoiselle', 'Messieurs', 'Mesdames', or 'Messieurs-dames', as is appropriate. Christian names are not used as often as they are in English speaking countries. Shaking hands is the most common form of greeting, while friends kiss on both cheeks. Known as bisou, this practice is appropriate between both men and women. In the provinces, it is not unusual to deliver three kisses to each cheek.

Generally for business, men wear a business suit and tie, while women wear a suit, trouser suit or conservative dress. Smart casual clothes are acceptable in most other situations and the French take great pride in their appearance.

Department stores open from 09:30 to 18:30 Monday to Saturday; smaller shops generally open earlier at 08:00 and close later at 20:00. Many large stores stay open until 22:00 pm on Wednesdays and Thursdays. Some Paris stores open on Sunday, but not all.

There are no restrictions on the amount of money or currency that can be brought into France.

British, American, Italian, German, Swiss and Spanish newspapers and magazines are available through hotel Concierge, and at most news vendors throughout Paris. There are no specific French papers published in English.

Best buys for what's on in the city are magazines Pariscope and L'Officiel des Spectacles published weekly in French.