The multitude of wonderful tourist attractions in Paris offers something for everyone. With over 2,000 years of French history and a rich cultural heritage, Paris is amongst the foremost cities of the world, being famed for the sheer beauty of its architecture and its artistic development, and there are many wonderful examples to be seen throughout this alluring city.

Tourists will find that some of the most noteworthy attractions in Paris include the world-famous Moulin Rouge, the appealing Montmartre neighbourhood, the architecturally pleasing Opéra Garnier and the simply enormous Avenue des Champs Élysées, which leads to the Arc de Triomphe. If you have the time, then do consider a cruise along the River Seine, with boat trips running throughout the year, both by day and during the evening.

Address: 82 Boulevard de Clichy - Place Blanche, Paris
Tel: +33 (0)1 46 06 00 19
This risqué world-famous cabaret has been playing to audiences since 1900. The Moulin Rouge, immortalized by Henri Toulouse-Lautreche, and famous for its French cancan, still features feathers, shinestones and sequins, fabulous settings, original music and of course the most beautiful girls in the world ! All brought up to date by computerised lighting.
Open hours: Two performances every evening of the year

Address: 18th Arrondissement, Paris
This elevated rural neighborhood located on the outskirts of the city features a collection of upscale shops and cafés while still retaining hints of old village charm. 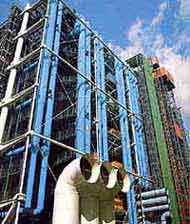 Address: Place Georges-Pompidou, 4e, Paris
Tel: +33 (0)1 44 78 12 33
This is one of the city's most popular tourist attractions, displaying and promoting modern and contemporary art and featuring works by Picasso, Matisse, Miro and Pollock.
Open hours: Wednesday to Monday - 11:00 to 22:00

Address: Place de l'Opéra, Paris
Tel: +33 (0)1 44 73 13 00
Palais Garnier, built by Charles Garnier and inaugurated in 1875, is a masterpiece of 19th-century theatrical architecture. Now mainly used for ballet performances, this theatre was the hiding place of the 'Phantom of the Opera' in Paul Leroux's famous play.
Open hours: daily - 10:00 to 18:00 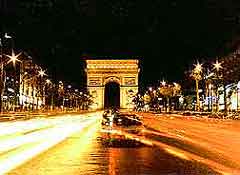 The Champs Élysées symbolises the style and joie de vivre of Paris. This wide, tree-lined avenue is home to the city's chic restaurants, shops and boutiques and extends from the Arc de Triomphe. This boulevard is known for its concentration of high culture, although nowadays fast food outlets, car showrooms and cinemas can be found here.

Address: 8th Arrondissement, Paris
This busy landmark square at the end of the Champs Élysées offers a true Parisian experience. The Concorde Square was formerly called the Revolution Square as it was the site of the guillotine that executed Louis XVI, Marie-Antoinette, Danton, Robespierre, and numerous others between 1793 and 1795. Now, instead of a guillotine, there is an obelisk which was given to France by Egypt and comes from the ruins of the temple of Ramses II.

Address: Saint-Denis, Paris
This magnificent world-class stadium resembles a flying saucer and has a capacity for 80,000 spectators for football / rugby, 75,000 for athletics meetings and 100,000 for concerts.
Open hours: daily - 10:00 to 18:00 for tours

Address: 4th Arrondissement, Paris
The oldest public square in Paris, features a meticulously manicured central park and is surrounded by magnificent 17th-century townhouses. This square was built during the reign of King Louis XIII, and is situated in a lively artistic district.

Address: 75012 Paris
The neighbourhood surrounding the ruins of the prison has now become a centre of Parisian nightlife, with an array of popular cafés, restaurants, and clubs and is also home to the Opéra Bastille completed in 1990. The Colonne de Juillet dominates la Place de la Bastille and marks the site of the prison known as the Bastille which was stormed at the start of the French Revolution in 1789.

Address: 1 Quai de l'Horloge, Paris
Situated on the Ile-de-la-Cité, this former jail which held prisoners during the French Revolution's Reign of Terror, is open to the public and now makes up much of the Palais de Justice complex.
Admission: charge

Address: 58 Rue de Richelieu, Paris
One of the largest research libraries in the world, this modern glass and chrome architectural masterpiece is situated on the banks of the River Seine.

Address: 33 Avenue du Maine. 75015 Paris
This striking tower at Montparnasse rises 209 metres / 690 feet above Paris and offers breathtaking panoramic views of the entire city from its observation deck. The view, on a clear day, covers a radius of 40 kilometres. The tower also features a restaurant.

Address: 75001 Paris
Featuring a statue of Napoleon at the top of the Colonne Vendôme in its centre, this public square is world-famous as the central place for jewellery in Paris.

Address: Place du Palais Royal, Paris
The Royal Palace and garden is surrounded by arcades. It is here that the French Revolution began but nowadays Le Palais Royal offers a relaxing and peaceful environment and houses the Council of State.

Other Sights to See