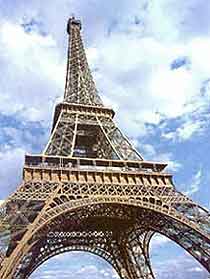 This breathtaking landmark was built for the Universal Exhibition of 1889 to commemorate the centenary of the French Revolution, and was opened by the Prince of Wales, who later became King Edward VII of England.

An outstanding engineering achievement, designed by Gustave Eiffel (who also designed the framework for the Statue of Liberty) the tower was originally disliked by many Parisians, but has now become a famous symbol of French civic pride. The most spectacular views of Paris are witnessed from all floors of the Eiffel Tower.

Although it stands 320 metres / 1050 feet high, it is possible to walk part of the way up and around this fascinating metal structure. A lift completes the journey to the top.

A towering edifice, which was the world's tallest structure until 1930, the Eiffel Tower is visited by six million people a year.
Naples Churches

Facts About The Eiffel Tower