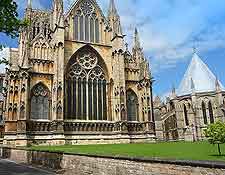 Seasonal interest is plentiful in Lincoln, coming in the form of various festivals, events and activities, a number of which are staged at the university's Lincoln Performing Arts Centre at Brayford Pool. Many regular events and things to do take place throughout the year in Lincoln, such as performances at the Theatre Royal on Clasketgate, the exciting race days held at the nearby Market Rasen Racecourse, antiques fairs at Newark, and an increasing number of local handicraft and farmers' markets.

Festivals in Lincolnshire celebrate everything from sausages and pumpkins, to busking, chamber music, walking and agriculture. If you are in the city at the beginning of December, then there is a good chance that you are here to visit the renowned Lincoln Christmas Market extravaganza, which is typically German in character and lasts four days, attracting around 250,000 visitors each year.