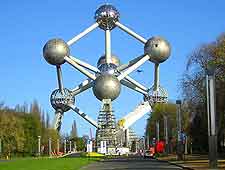 Located just a few kilometres to the north-east of Brussels is Belgium's main air gateway, Brussels Airport. While it serves the Belgian capital, it is also widely used as an entryway to continental Europe, handling in the region of 19 million passengers a year.

Also known as Brussels Airport Zaventem, it dates back to WWI and has three runways, served by one well-equipped terminal. Flights come in from all major continents with myriad airlines, including British Airways, KLM and Lufthansa (from major European cities), Air Canada and Continental (from North American cities), and Singapore Airlines and Thai Airways (from Asian cities).

The airport comes with extensive facilities and is served by ground transportation including trains, buses and taxis. Getting to the city and its entertainment district by car is also straightforward.

Address: BIAC (Brussels International Airport Company), B-1930 Zaventem, Belgium, BE
Tel: +32 2 753 4200 / 0900 70000 (Belgium only)
Brussels Airport is located some 12 km / 7.5 miles to the north-east of Brussels city centre and about 42 km / 26 miles due south of the northern Belgian city of Antwerp. It resides near the Zaventem district and alongside Steenokkerzeel. There is one terminal building, which makes it easy to find your way around.

The airport is situated just outside the city ring road, with the city centre being roughly 20 to 30 minutes' drive to the south-west by car. The A201 will lead you right into the city centre, while the R0 ring road is the best option for getting to other areas of the city. To travel to Antwerp, you can avoid Brussels altogether by taking the A1 north.

Public buses take 30 to 45 minutes to reach Brussels city centre and the bus station is underneath Arrivals. Buses run to the Brussels-North Railway Station and the European quarter, as well as to Antwerp, with various providers including De Lijn and AirportExpress. Hotels shuttle buses also serve the airport.

The Airport City Express service runs every 15 minutes and takes 15 to 25 minutes to serve all three railway stations in the city - Central, North and South. The onsite station, located underneath the terminal, is well signposted. You can also get to other cities such as Ghent by train from the airport.

Taxis can be expensive from Brussels Airport to the city, and so passengers are advised to ask the price before getting in. Avoid pre-booking taxis as they will add a surcharge for lateness and may even include parking time. Taxis are slower than trains, although can be more convenient and are relatively stress-free.