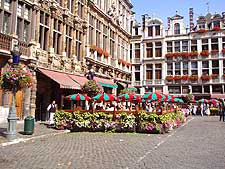 Dining out has long been a major pastime in Brussels and the city contains a serious number of quality eateries and restaurants. Whilst there are plenty of restaurants all around Brussels, many tourists tend to stick to the largest and most obvious, which line the cobblestone alleys around the Grand Place and can also be found along the gastronomic Rue des Bouchers, the Rue du Midi, the Passage du Nord and the Galeries St. Hubert.

Brussels is also home to a plethora of charming cafes and coffee shops, which often feature surprisingly extensive menus and certainly much more than just cakes. Being such a cosmopolitan city, those dining out here can expect a wealth of international restaurants, such as Greek, Italian, Japanese, Spanish and also Turkish, along with many traditional Belgian eateries. 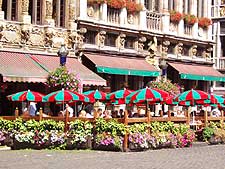 Many superb seafood restaurants are scattered around the Sainte Catherine's area and close to its famous fish market, particularly along the streets next to the Place St. Géry. If you are simply looking for a hot snack, then try one of the many chip shops (frituurs) in Brussels, which are grouped around the Rue du Marché aux Herbes, off the Grand Place, and serve cheap cones of chips or French fries (frites). Many sandwich bars are also situated in this part of Brussels, along with bakeries and branches of Belgium's very own burger chain, 'Quick'.

For the best Greek-style restaurants in Brussels, the Gare du Midi area is the place to head and in particular, along the Rue d'Argonne. Nearby and actually inside the train station is a useful supermarket (GB Express), which opens daily and is a good option for those looking to self-cater, or stock up for a picnic in the Parc de Bruxelles. 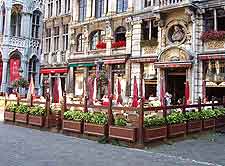 Many of the cheapest dining options in Brussels are concentrated around the Sablon district, on the Rue Watteeu and the lively Rue des Sablons. These restaurants provide good value meals, such as tasty filled pittas, salads and plenty of vegetarian choices. For inexpensive Turkish fare, many enticing traditional Turkish pizza joints (pide) are located within the St. Josse area of Brussels and along the Rue du Méridien and the nearby Chaussée de Haecht.

Cheap eats in Brussels are plentiful around Ixellese and also in Marolles, close to the flea market at the Place du Jeu de Balle, while for Japanese sushi, Italian restaurants and bistros, the Place St. Géry is the area to be seen. Slightly further afield, the Porte de Namur does contains some popular restaurants and similar dining venues, on streets such as the Rue St. Boniface and the Rue de Stassart.