Getting Around, Alice Springs Travel, Transport and Car Rental 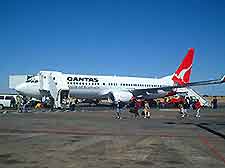 Various different transport options present themselves around the historic town of Alice Springs. Tourists often choose to travel around the area via buses or taxis, while others prefer to hire a vehicle for the duration of their stay.

Having your own rental car will provide that little bit more freedom, allowing you to easily explore surrounding attractions such as the Ilparpa Swamp Wildlife Protected Harbour to the south-west, as well as the Emily and Jessie Gaps Nature Park to the south-east. The Stuart Highway provides excellent transport connections, with this busy thoroughfare heading north to south, between Tennant Creek and Indulkana, respectively.

Alice Springs comes with its own regional airport, which connects all of the principal cities around Australia. This is a relatively small airport and as such, its facilities are far from extensive. However, if you are looking to get to another part of the country in a hurry, then this is the place to come, with the airport now serving in the region of 700,000 passengers annually.

Address: Santa Teresa Road, Alice Springs, Northern Territory, NT, 0870, Australia, AU
Tel: +61 8 8951 1211
The town is served by the Alice Springs Airport (ASP), which is situated just 15 km / 9 miles from the centre, being to the south and next to the Santa Teresa Road. Airlines based here include Ausjet Aviation, Qantas and Tiger Airways Australia. Ground transport options come in the form of buses, shuttle buses and taxis, based next to the main terminal building.

Renting a car is generally the most popular way to travel around the Northern Territory, with many firms offering discounts for car rentals hired for periods of more than two days. Major car rental companies in the Alice Springs area include Avis, Hertz, National and Thrifty Car Rental.

If you are planning a driving holiday through scenic bushland, then Alice Springs may well prove a good base, particularly as it sits alongside the Stuart Highway (87). Darwin can be reached in approximately 17 hours, while Adelaide is roughly 18 hours away by car, via Coober Pedy. Therefore, both of these destinations will require an overnight stay somewhere along the way. Closer to the town, cars are a handy way to reach the nearby Emily and Jessie Gaps Nature Park, the Ilparpa Swamp Wildlife Protected Area, and the Kuyunba Conservation Reserve, amongst other places of interest.

The regional bus network is operated by McCafferty's and Greyhound Pioneer Buses, with regular daily services that travel outside of Alice Springs to nearby areas and also further afield. A number of buses connect Yulara (five hours), Adelaide (20 hours), Darwin (20 hours) and many areas of Queensland.

Keen sightseers may like to consider boarding the Alice Wander Bus, which offers a circular route around 12 principal sights, including the Telegraph Station Historical Reserve to the north, just off the Stuart Highway, and the Old Ghan Heritage Railway and Museum on Norris Bell Avenue. Greyhound coaches are also available, heading both northwards and southwards. 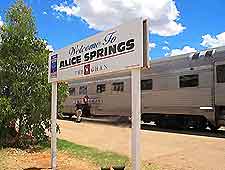 The main rail service in Alice Springs is the Ghan train, which has regular trains that travel to Melbourne each Tuesday and Friday. A new train extension has recently been added, connecting Darwin, Tennant Creek and Katherine.

Most trains are modern, clean and fully air-conditioned. Of note, cyclists will be pleased to learn that bicycles are usually permitted on trains.

Taxis here are operated by Desert Private Hire Cars and Alice Springs Taxis, both of which provide a highly convenient way to travel around the area. Local taxi ranks can be found on the corner of the Gregory Terrace and Todd Street, close to the Civic Centre and Council Office.

Alice Springs is home to an extensive network of cycle trails and pathways, which travel around many of the recreational and scenic areas of the Northern Territory. The town is relatively flat and cycling is therefore a very pleasant way to reach outlying attractions, such as the Desert Park.

Carrying drinking water at all times is a good idea when cycling here, particularly during hot weather. Bikes can be rented per half-day, per day or by the week. For any longer, it may well be more cost-effective to simply buy a cheap bicycle and then sell it when you fly home.