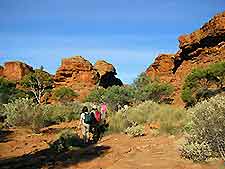 Alice Springs is home to many popular tourist attractions, and both the town and the surrounding areas are full of tremendous natural beauty.

Visitors will be able to stroll along scenic bushwalking trails, explore the local gardens, admire the historic buildings and visit the most noteworthy tourist attractions.

Bushwalking in Alice Springs is one of the best ways to see the native flora and fauna. There are a number of bushwalking trails around town, including trails from both the Telegraph Station and the Olive Pink Botanical Gardens. Especially popular is the Larapinta Trail, which takes in the Macdonnell Ranges and stretches in a westerly direction for roughly 250 km / 155 miles, incorporating a desert range and leading all the way to the Redbank Gorge. 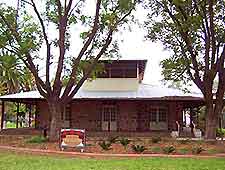 Address: Todd Mall, Alice Springs, Northern Territory (NT), Australia
Tel: +61 (0)8 8952 1856
Commemorating the lives of important outback pioneers, Adelaide House dates back to the 1920s, when it was the first purpose-built hospital in Alice Springs. This air-conditioned building contains a popular memorial museum, honouring the life of Reverend John Flynn (1880 to 1951), a famous Australian Presbyterian minister who will be remembered in history as the man who founded the country's renowned Royal Flying Doctor Service (RFDS). Many related exhibits are on display, including early pedal-powered radios and lots of memorabilia documenting the early days of the flying doctors, known then as the 'Aerial Medical Service'.
Open hours: Monday to Friday - 10:00 to 16:00, Saturday - 10:00 to 12:00
Admission: charge, discounts available for children and students

Address: Parsons Street, Alice Springs, Northern Territory (NT), Australia
The Stuart Town Gaol was built in the early 20th century and is actually the oldest surviving building in the entire town. Today, the gaol is owned and managed by the National Trust. Visitors to this heritage attraction will be able to learn about the periodic flooding problems suffered in the past when the Todd River swelled during extreme rain, and how it was necessary to build a replacement prison in 1938, on the Stuart Terrace. Close by you will find a number of distractions, such as numerous shops and restaurants, and the Sounds of Starlight Theatre on the Todd Mall, where regular didgeridoo shows are a highlight.
Open hours: Monday to Friday - 10:00 to 12:30, Saturday - 09:30 to 12:00 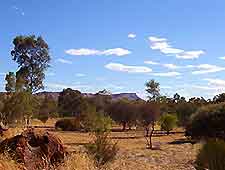 Address: Tuncks Road, Alice Springs, Northern Territory (NT), Australia
Tel: +61 (0)8 8952 2154
Lying within the southerly neighbourhood of Desert Springs and on the eastern bank of the Todd River, the Olive Pink Botanical Gardens cover an area of just over 40 acres / 16 hectares. These landscaped gardens were created on wasteland in the mid-1950s, being designed and established by one Miss Olive Muriel Pink.

Now under the ownership of the Northern Territory Government, the gardens regularly suffer at the hands of drought and therefore indigenous plant species are mainly grown here, with more than 500 different species in total. Further highlights include a visitors centre, self-guided pathways - such as the Hill, Mallee and Wattle walks, native plants with edible fruit, various themed art exhibitions and workshops, and the Bean Tree Cafe, which is open between the hours of 08:00 and 15:00. Also of interest and staged here each March is the ever-popular Flickerfest, which showcases the latest Australian and international short films and documentaries.
Open hours: daily - 09:00 to 18:00
Admission: free

Address: Hartley Street, Alice Springs, Northern Territory (NT), Australia
Tel: +61 (0)8 8952 9006
The Old Courthouse was constructed in 1928, when it was the office of the administrator for this area of Australia, before functioning as the town's courthouse until 1980. Of note, the building is now called home by the National Pioneer Women's Hall of Fame.
Open hours: daily - 10:00 to 17:00
Admission: charge, discounts available for children