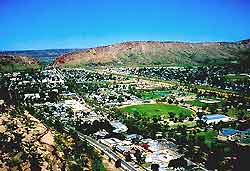 Alice Springs, in the Northern Territory (NT) of Australia, is known locally as just 'Alice' and is the largest settlement in central Australia. Surrounded by scenic areas of outback Australia, Alice Springs was established as an Overland Telegraph Station in 1871 and grew rapidly when it was connected to the rest of Australia by the Ghan train line, which opened in the early 20th century.

Alice Springs is one of the most important and historic towns in northern Australia, and boasts a wealth of Aboriginal heritage. The town is surprisingly modern and civilised, with large shopping centres and superb restaurants, particularly along the pedestrianised Todd Mall. In the centre, Gregory Terrace is where you will find the Central Australian Tourism Industry Association and its plentiful free tourist information, such as the useful 'Welcome to Central Australia' booklet. 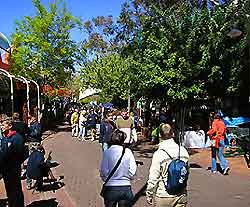 Historic tourist attractions in this charming town include Adelaide House - dating back to the 1920s, when it was the first purpose-built hospital in Alice Springs; Stuart Town Gaol - the oldest surviving building, built in the early 20th century and now owned by the National Trust; the Olive Pink Botanical Gardens - in the town centre, close to the scenic Todd River, with many huge native trees; and the Old Courthouse - constructed in 1928, when it was the office of the administrator for this area of Australia, before becoming the Alice Springs Courthouse until 1980, and then finally the home of the National Pioneer Women's Hall of Fame. 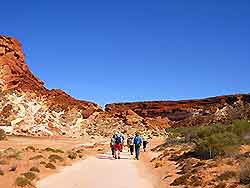 Other popular attractions for tourists visiting Alice Springs and the Northern Territory of Australia include bushwalking - one of the best ways to really appreciate the native flora and fauna, scenery and breathtaking landscapes; the Alice Springs Reptile Centre - a popular attraction with children visiting the Northern Territory; the Desert Park - a large wildlife reserve featuring breathtaking scenery, local wildlife and birds of prey; the Frontier Camel Farm - with fun camel rides and a small museum; the Road Transport Hall of Fame - featuring a vast collection of historic vehicles, including vintage cars, motorcycles and early trains; and the town's Golf Club an exceptional 18-hole course, widely considered to be one of the best and most scenic golf courses in Australia. More information about Alice Springs Attractions and Landmarks and Alice Springs Golf Courses.

Alice Springs also has some excellent local museums these include the Aviation Museum of Central Australia - in the former Connellan hanger at the old Alice Springs Airport, containing a number of small planes and much aviation-related information; the Museum of Central Australia - housing wealth of interesting collections, local artefacts and historic Aboriginal exhibits; the Old Ghan Train and Museum - home to a collection of lovingly restored locomotives and interesting train memorabilia; and the Alice Springs Araluen Art Centre - with four large art galleries, regular exhibitions of contemporary paintings and Aboriginal art work, and an impressive a sculpture garden. More information about Alice Springs Museums and Art Galleries.

Alice Springs, one of most important cities in the Northern Territory of Australia, is situated on a large sweep of the Todd River, which remains dry for much of the year. With some of the most sunny and dry weather in Australia, throughout the year, Alice Springs is a thriving town and leading tourist destination, offering a very different and memorable Australian holiday.