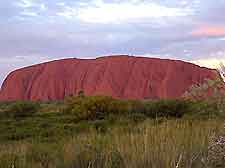 Located in the geographical heart of Australia, the town of Alice Springs has a deep connection with the Aboriginal people who have lived in this central region of the country for millennia.

Its isolated location actually helped make it an important town in the network of early colonial Australia, as its history was linked to the main transport and supply routes between north and south. Tourism provides most of the economic impetus in Alice Springs these days, thanks to the interesting blend of Aboriginal and Australian culture on display.

The Central Australian desert around Alice Springs was the home of the Arrernte Aboriginal people for thousands of years prior to the arrival of the first Europeans. In fact, archaeological evidence suggests that the area has been occupied by serious settlement for perhaps 30,000 years. This makes Alice Springs one of the world's oldest continuously inhabited places.


The region is rich in waterholes, mountains and other geological features that create a diverse and livable terrain amidst a very harsh surrounding environment. The Arrernte have always known this and have set aside numerous conservation areas around Alice Springs, such as Emily Gap, Anzac Hill and Heavitree Gap. Today, these historic, natural and cultural sites attract a steady flow of visitors looking for interaction with the original Aboriginal culture of Australia.

In 1861, an English explorer named John McDouall Stuart was the first European to make his way to Alice Springs. Stuart established a route connecting the north and south coasts of Australia, an important link in those early days. A decade later, the Overland Telegraph Line built a repeater station where Alice Springs sits today. The telegraph line linked Adelaide to Darwin, and thus onwards to the United Kingdom. This single act of development opened the doors to permanent white settlement in the area, but it wasn't until gold was discovered nearby in 1887 that the population really expanded. 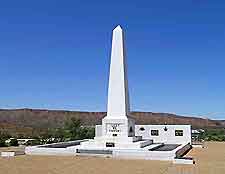 World War II did more to put Alice Springs on the map than any other event in its history. It was a vital staging base for military movements involved in the long four-day trip across the country. The railway line that ran through the town was commandeered by the military, and soon the area was flooded with soldiers and other personnel.

The modern history of Alice Springs owes a lot to the Japanese threat along Australia's northern coast. Much of Darwin was evacuated during the war, forcing thousands of civilians to migrate to or through Alice Springs. Once the war was over, the town developed a rather famous reputation and now had a solid infrastructure left behind by the military effort.

Alice Spring's contemporary history has mainly been shaped by its role in Australian tourism. Situated at nearly the exact geographical centre of the country, it is 1,500 km / 930 miles from the nearest city of note and in the region of 1,200 km / 745 miles from any coastline. Alice Springs also serves as the centrepoint for the popular Adelaide to Darwin Railway line.

With its lively mix of Aboriginal and European influences, the town provides visitors with plenty to see and do. It has embraced its Aboriginal roots, promoting the art and culture of these ancient peoples. Yet Alice Springs is also as modern as anywhere in Australia, with a full range of amenities and attractions. With so much to offer, it is no surprise that this remote town in the heart of Australia remains a popular tourist destination.