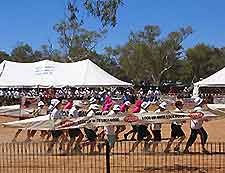 The Northern Territory sees a number of fun festivals and well-supported events, with Alice Springs being called home by some of the most significant. Many of the principal things to do tend to be based around the Todd Mall, where community celebrations and exhibitions of large art works are amongst the principal draws.

Numerous events staged in Alice Springs reflect the arid nature of this part of Australia. The annual Alice Desert Festival incorporates the famous Lions Camel Cup, where camel races take place at Blatherskite Park, being organised by the Lions Club and first staged in 1970.

Those arriving around springtime (September in Australia) will be able to join the crowds gathered on the banks of the dry Todd River, where the Henley-on-Todd Regatta takes place. However, with a lack of water, this is a sailing regatta with a difference, as the crews simply race along the dry river bed with their bottomless boats, a number of which are armed with flour bombs and fun water-based weaponry.