Singapore City Weather, When to Go and Climate Information 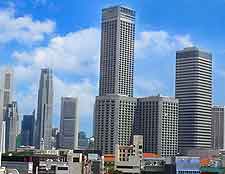 Singapore is very close to the equator (slightly north), resulting in a pretty uniform climate which remains hot year round. The weather is typically humid with a fair amount of rainfall.

June to August is the most pleasant time to visit, since it is less humid and doesn't rain so much. The Food Festival and Singapore Grand Sale go off at this time.

To miss the rainy season, avoid visiting between November and January. 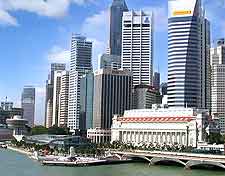 Although it can be wet at any time of the year, most rainy weather arrives during the north-east monsoon, between November and January. However, it rarely rains all day, with storms usually occurring in the afternoon and heavy downpours coming from these impressive thunderstorms.

May to October often sees Singapore City cloaked in a haze due to forest fires in nearby Sumatra. The coolest time is December to January, although the temperature never drops below 20°C / 68°F. Expect daytime temperatures in the low 30s (mid-20s at night) the rest of the year.

It is easy to escape the hot climate, as all shopping malls and food courts come with hearty air conditioning. In fact, it's slightly over the top, with temperatures usually set very low. You may find yourself becoming used to it, with any length of time out in the open being something of a chore.