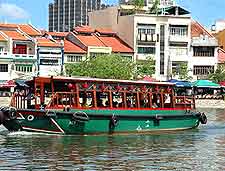 
The following comments about attractions in Singapore City have been posted from individuals. We believe that the best reviews of Singapore City, Singapore are written by travellers and holiday makers who have experienced Singapore City first hand and want to share their thoughts. Can you share yours? Please help us expand this section of our Singapore City World Guide.


Let us know what you think about the attractions in Singapore City, Singapore.

Marina Bay Sands Hotel
Impossible to miss, as it is a very big and modern hotel. It has great views, but being on a high floor probably helped with that. It is expensive. Don't go thinking it will be cheap, as it is not. I found my room unexpectedly spacious, which was a nice surprise. I thoroughly enjoyed my stay but would not go again for the price.
Posted on 18/9/2012 by Teresa Green

Re. South East Asia's best shopping haven...
You should come back between May and July, when the Great Singapore sale is on. Then you would definitely notice some difference in prices! Also try and look up some designer outlets a little out of the CBD or just over the Malaysian border in Johor Bahru.
Posted on 3/1/2011 by asiangirl

South East Asia's best shopping haven...possibly the world's?
Me and my daughters have been along Oxford Street, 5th Avenue, and all the rest of them but Orchard Road stood out for us. We visited quite a few countries in South East Asia during the month we spent there, including Thailand and Hong Kong, but the best shopping was to be had on Orchard Road be it in the malls or independent department stores. The traffic was well-handled, there were plenty of places to sit down and take a breather, all the big names were represented, and people were so polite. We weren't too concerned that there sometimes wasn't much difference in prices there and back home.
Posted on 3/12/2010 by Wendy Mullan

A bit corny but it just had to be done
We were told by countless amounts of friends that no trip to Singapore would be complete without a famous Singapore Sling in the Raffles hotel. It goes without saying that they set you back quite a bit if you're going to sit there all afternoon but you can definitely see why this is such a popular tradition. A lovely afternoon in an old colonial building that is a Singaporean landmark.
Posted on 4/5/2009 by L Burnham

Re. Felt like Batman looking down on Gotham City
Bruce, there are plenty of other places you can enjoy views of our city's skyline without pay any dollar. Benjamin Bridge, One George Street, and Marina Barrage just few! You don't need pay that crazy money!
Posted on 21/2/2008 by Robyne

Felt like Batman looking down on Gotham City
Always been a great admirer of the wonderful Asian supercity skylines and the Sands SkyPark is definitely up there with The Peak in Hong Kong. Less than a mile from the CBD and much more than a place to just gawp at skyscrapers as there are nightclubs, bars, swimming pools and everything else. A little overpriced though!
Posted on 22/1/2008 by B Wayne