Lying within the Indian Ocean and in western Indonesia, Sumatra is a huge island, with jungle trails and plenty of beaches for holiday makers. As well as being so large, Sumatra is also an incredibly diverse island, with in excess of 50 different tribal languages, large groups of wild orangutans, and even some smoking volcanoes thrown in for added interest.

Sumatra appeals to a certain kind of holidaymaker, and if you are expecting something along the same lines as Bali, then you are certainly in for a pleasant surprise, with many tourists enjoying cruises around the fabled Mount Krakatoa volcano. Sumatra is far less commercial and much more of an adventure, and those wishing to learn more about the island's offerings should pay a visit to the cities and provincial capitals of Banda Aceh, Bandar Lampung, Bengkulu, Kota Jambi, Medan (the largest city), Padang, Palembang and also Pekanbaru.

The tourist attractions of Sumatra are quite different all around the island, with the coastal resorts and beaches suiting the majority of holiday makers. In the province of North Sumatra, the city of Medan is the regional capital and is an enormous, modern city, and yet still manages to retain some of its earlier colonial character. On the far north-westerly tip of Sumatra, Banda Aceh is another city of note and boasts an appealing seafront setting, being relatively close to the Gunung Leuser National Park, the Gayo Highlands and the Banyak Islands. In West Sumatra, definite highlights include the valleys of Harau and Kerinci, the market town of Bukittinggi, the metropolis of Padang, and the scenic archipelago of the Mentawai Islands. On the southern side of Sumatra, the enormous city of Palembang and the Pasemah Highlands are worth penciling in, as is a trip to the restful Riau Islands, the central province of Jambi, the southerly city of Bandarlampung and the nearby Way Kambas National Park, where Sumatran elephants and tigers live. More information about Sumatra Tourist Attractions.

Sightseers on Sumatra will certainly have a 'field day', since there are so many epic landmarks, beautiful Islamic mosques and historic temples. The best of these include the Maimoon Palace (Istana Maimoon) and Grand Mosque (Mesjid Raya) at Medan, the Baiturrahman Mosque (Mesjid Raya Baiturrahman) at Banda Aceh, the Muara Jambi Buddhist temple at Jambi, and the Sungaipenuh Mosque (Mesjid Agung Pondok Tinggi) in the Kerici Valley. For something somewhat older, the ancient megalithic sites at the Pasemah Highlands are certainly thought provoking and date back some 3,000 years. However, not all the impressive landmarks around Sumatra are manmade, with the naturally formed Gunung Sibayak at Berastagi being especially imposing, together with the westerly Danau Maninjau lake and the more northerly volcanic lake of Danau Toba. More information about Sumatra Landmarks and Monuments.

If you are holidaying on Sumatra and decide that you would like to visit a few museums during your stay, then you have a few reliable choices. Medan is home to the esteemed Museum of North Sumatra and its extensive collection of ancient stone carvings from Pulau Nias. In Banda Aceh, regional artefacts and local information await visitors at the Museum Negeri Banda Aceh. Those with an interest in the past should be sure to check out the exhibits relating to the Sriwijayan period at Palembang's Museum Sumatera Selatan, or the Neolithic relics and finds at the Lampung Provincial Museum. More information about Sumatra Museums.

A holiday on Sumatra will provide tourists will plenty of sightseeing opportunities and attractions to enjoy. However, if you have the time and inclination, it is quite possible to visit a number of nearby tourist destinations and Indonesian islands. Sumatra is within easy reach of West Java, where the Indonesian capital of Jakarta and the province of Banten reside. Excursions to the Mentawai Islands, Pulau Bangka, Pulau Belitung and the Riau Islands are also very popular, while for a rather different experience, consider a ferry trip to Singapore, or Kuala Lumpur in Malaysia, both of which are just a relatively short distance to the east. More information about Sumatra Attractions Nearby. 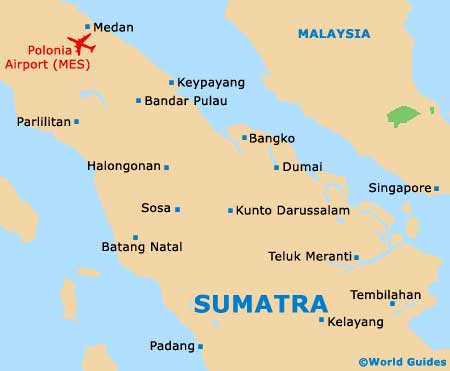