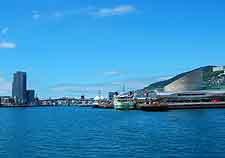 A spirited city on the island of Kyushu, Nagasaki is located in southern Japan and is the biggest city in the Nagasaki Prefecture. Although its interesting history is somewhat overshadowed by the devastating events during the Second World War, Nagasaki quickly recovered after being bombed and is once again a city full of extreme natural beauty and many fascinating museums.

If you are visiting this area of Japan, be sure to visit this appealing city and make time to explore properly. Many unmissable sights await and a visit to the Tourist Information Centre (TIC) at Nagasaki Station is always worthwhile. Nearby and to the south, the central part of the city comprises the Shian-bashi entertainment district and also the Hamano-machi, while both the Golver Gardens and also the Dutch slopes are within walking distance and not to be missed. 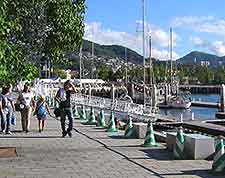 Top attractions in Nagasaki include the Inasa-Yama Lookout - with regular cable car rides ascending to the very top of the mountain; Glover Garden - an important port area with nine historic western-style houses and superb views; Nagasaki Seiyoh-kan - a huge shopping and entertainment complex; Urakami Cathedral - a fairly modern reconstruction of an older building damaged in the bombing; Nomozaki Marine Land - with a range of underwater creatures, including an enormous collection of shellfish; Huis Ten Bosch - a amusement park with fast rides, live shows and even pleasure boat rides; and also Peace Park - a particularly famous spot with a prominent memorial statue. More information about Nagasaki Tourist Attractions. 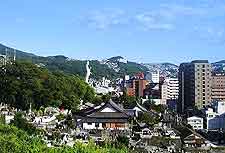 Around the city of Nagasaki you will find a number of prominent landmarks and historic structures. Particularly notable, the Kofukuji Temple dates back to the early 1800s and is still in regular use today, while the equally impressive Koshibyo Shrine was built more recently, in the latter part of the 19th century. Nagasaki's other notable buildings include the wooden Oura Catholic Church, the ancient stone-arched Spectacles Bridge, the 400-year-old Sumiyoshi Shrine, and the Suwa Shrine, which enjoys an elegant setting and overlooks much of the city. More information about Nagasaki Landmarks. 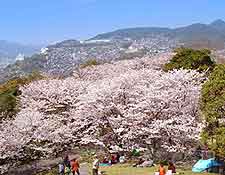 Home to numerous reminders of the past, Nagasaki's museums celebrate many of the city's achievements, and also remembers the tragedies. The Atomic Bomb Museum is especially poignant and at times graphic, offering an insight into an important chapter of history. A little more upbeat, the City Science Museum appeals to families, as do the interactive displays and workshops at the Museum of History and Culture. For local artefacts and many works of art, a visit to the Nagasaki City Public Museum is in order. More information about Nagasaki Museums and Nagasaki Art Galleries. 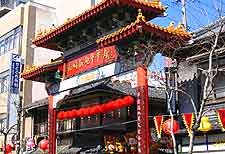 Nagasaki is home to more than enough attractions for most visitors, although those looking to explore other areas of Japan will find plenty on offer nearby. Highlights close to Nagasaki include the bustling city of Fukuoka and is ancient castle, the many temples and seasonal festivals at the nearby easterly city of Kumamoto, and the coastal attractions at Omura, where you will discover scenic islands, inviting waters and a popular theme park. More information about Nagasaki Attractions Nearby. 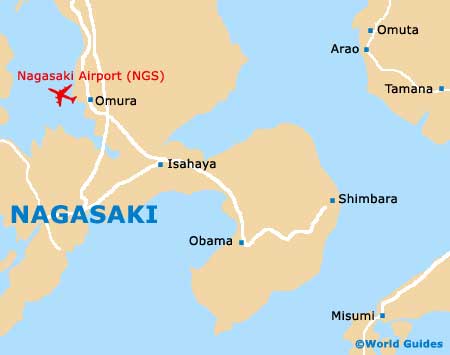