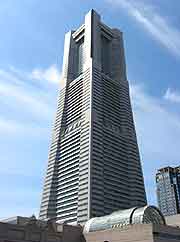 When the British arrived in the 1880s looking for trade with Japan, Yokohama turned from a tiny, traditional Japanese fishing village into a major international port almost completely overnight.

Landmarks fill the coastal sections of the city, hailing the numerous 'firsts' which Yokohama accepted from foreign countries.

In keeping with this trend of being at the forefront of Japanese development, visitors to Yokohama can tour the country's tallest building - a particularly famous local landmark, explore the old pier and port with its iconic bay bridge, and spend some relaxing leisure time in one of the many parks that dot the city. Yokohama's main landmarks are below. 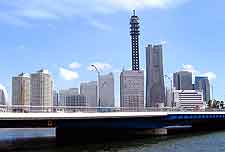 Address: 2-2-1 Minato Mirai, Nishi-ku, Yokohama, Japan, JP
Tel: +81 045 222 5030
Let the world's fastest elevator zip you up to the top of Japan's tallest building, where you can catch some of the sweetest views in the city. The observation deck, called Sky Garden, serves up a panorama of the harbour, Yokohama Bay Bridge and the entire city. On a clear day, you can even see Mount Fuji looming in the distance. Entrance to the famous Landmark Tower is not particularly cheap, but well worth the experience.
Open hours: daily - 10:00 to 21:00
Admission: charge 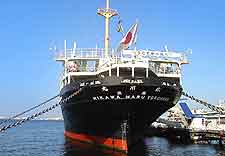 Address: Yamashita koen, Yamashita-cho, Naka-ku, Yokohama, Japan, JP
Tel: +81 045 641 4361
This rare Japanese naval survivor of WWII started life as an ocean liner in 1930, ferrying thousands of passengers between North America and Yokohama. But with the advent of the war, the Hikawa-Maru was put into military service. An unusual local landmark, those with an interest in naval history or ships in general will enjoy touring the ship, which has been transformed into a museum. The original engine room, bridge deck and various sleeping quarters are all open to viewing.
Open hours: daily - 09:30 to 21:30, seasonal variations apply
Admission: charge 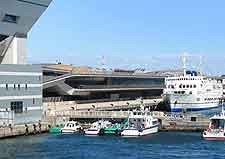 Address: 1 Osanbashi-dori, Naka-ku, Yokohama, Japan, JP
Tel: +81 045 641 4759
The original pier, completed in 1894, was a massive affair, easily dwarfing all other wharfs in Japan at the time. Osanbashi emerged as the centre of Yokohama's booming port scene, where the largest ships in Japan could dock. This became the entry point for most foreigners upon arrival in the country, and remains an important element of the city, still greeting gigantic ships from around the world.
Open hours: daily - 24 hours
Admission: no charge 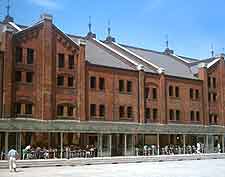 Address: Shinko-cho, Minato Mirai, Yokohama, Japan, JP
Tel: +81 045 227 2002
One of the classiest spots in the city is this nicely restored old brick warehouse along the docks. Providing a nice contrast to the rest of ultramodern Minato Mirai, where it is located, visitors can spend hours browsing the boutique shops, restaurants and bars. There is a huge variety of stores here, so take a step back in time and imagine you're wandering the Yokohama of the early 1900s.
Open hours: daily - 11:00 to 20:00
Admission: no charge 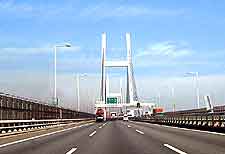 Address: Yokohama Bay Bridge, Nishi-ku, Yokohama, Japan, JP
Tel: +81 045 322 1212
This prominent landmark of Yokohama is a beautiful suspension bridge spanning part of Yokohama Bay. Its two distinctive H-shaped supports hold no less than 176 diagonal cables in a stunning futuristic design. Although the bridge carries cars, there is an excellent pedestrian walkway called the 'Sky Walk', which allows visitors to get right out into the middle of this engineering marvel.
Open hours: daily - 24 hours
Admission: no charge