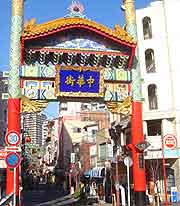 Japan's second-largest city of Yokohama is also one of its youngest. Just over 150 years ago, this massive international port city was a mere village of small, wooden houses.

World-class shopping, entertainment and recreation are here in abundance, found within its many appealing districts and neighbourhoods, giving the local residents little incentive to cross the river to Tokyo. 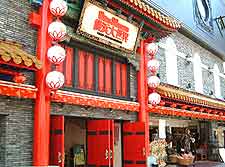 Japan's largest Chinese community resides just a few blocks from Yamashita Park in this teeming neighbourhood packed with more than 500 Chinese restaurants and shops. Four massive gates enclose Yokohama's buzzing Chinatown district, where the main activity is eating. English-language menus make it easy to browse busy main street's eateries and its dozens of offshoots. Check out the interesting curio shops and traditional herbalists when walking off your meal. This is also the place to catch some of Yokohama's most exciting themed festivals. 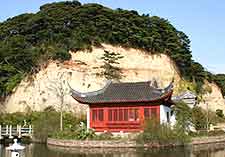 Yokohama's heart and soul lies within the historic waterfront district of Kannai, where visitors can soak in the maritime atmosphere of the Yokohama Port and all of the attractions that fill in the gaps. The stunning Sankei-en Garden is here, as well as a few interesting museums and notable landmarks, such as the Marine Tower, Yokohama Bay Bridge and Osanbashi Pier. Complementing Sankei-en Garden is the long green swath of Odori Park with its wonderful views of the bay. For an urban edge, you won't find anything quainter than the Red Brick Warehouse district. There's plenty to do in Kannai, and if you are looking for luxurious digs, the waterfront hotels here tend towards the grand. 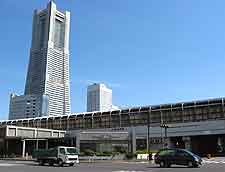 Japan's most ambitious urban development project is also one of Yokohama's most popular districts and a mini-city in itself. Centred around the nation's tallest building, Landmark Tower, this high-tech zone is packed with massive shopping complexes, entertainment centres and even the Cosmo World amusement park. Excellent hotels, convention facilities and arts venues make this an ideal site for visitors of all kinds to base themselves. Its bayside location between Kannai and Yokohama Station provides easy access to the rest of Yokohama, while serving up wonderful seaside views and enjoying a mountainous backdrop. 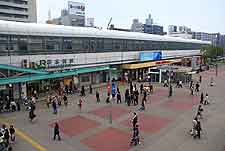 This is a great district to experience the nostalgic and earthy feel of old Yokohama. As one of the city's oldest areas, the feel of the buildings and people seem quite removed from the futuristic Minato Mirai district next door. The neighbourhood of Noge offers plenty of dining and drinking opportunities, and if you like jazz, check out some of the coffee shops reminiscent of the old port town. 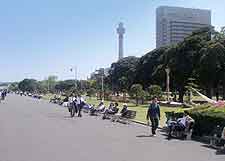 This large seaside park runs for a kilometre along the coast, with Yokohama Port as its anchor. While the park itself is extremely popular with locals and tourists alike, the nearby Isezaki Mall shopping street draws in just as many visitors. The concentration of movie theatres, specialty shops and trendy restaurants make this district a definite hotspot. Nearby, the cobblestone street of Basha-michi-dori, to the east of Kannai Station, is even more genteel and old fashioned. Come here to experience a taste of the Yokohama port town of old while you do some serious shopping. 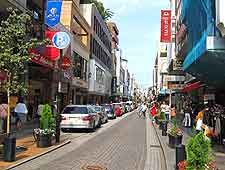 These two neighbouring hillside districts provide a home to many of the foreigners who live in Yokohama, as well as one of the city's premier shopping areas. Yamate has an exotic un-Japanese atmosphere full of Western-style churches and houses, and is home to the one of the best parks in the city, where the views over the port are unsurpassed. Motomachi is the place to shop for brand name goods of all kinds, thanks to its countless established stores, which thrive on their reputation for top quality.

Yokohama's main transport hub is also a great place to base yourself, as you explore this old port city. Most travellers will arrive here first as all trains, buses and airport transfers head straight to the station. There are plenty of decent hotels and restaurants around to add to the convenience. This is also Yokohama's largest shopping district, with several huge department stores and the popular Porta Shopping Plaza to keep your wallet busy.