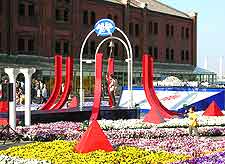 Yokohama and the surrounding Kanagawa Prefecture offer a bewildering array of festivals and events every month of the year. Without a doubt, there will be something interesting happening during your visit. Attending the city's festivals is a great way to gain insight into Japanese culture and ensure you go home with some fond memories.

Popular festivities in Yokohama include the apricot flower blossom festival of Ume Matsurig at Sankei-en Garden, which takes places in March, and the Yokohama International Fireworks Festival, celebrating summer and held on various nights in August.