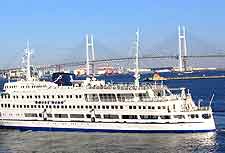 Although Yokohama pales in comparison to neighbouring Tokyo, for sheer quantity and quality of tourist attractions and amenities. However, there are more than a handful of sites and attractions in the international port city of Yokohama, which are well worth a visit and particularly memorable when viewed on a helicopter tour from Rinko Park's heliport.

Much of Yokohama's claim to fame lies in its modern vision, which is best exemplified by the futuristic urban enclave of Minato Mirai. Check out Japan's tallest building, biggest Ferris wheel and one of its most entertaining amusement parks in this planned community, where family fun and exciting attractions await. 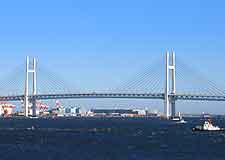 Address: 2 Sky Walk, Nishi-ku, Yokohama, Japan, JP
Tel: +81 045 506 0500
One of the more interesting activities in Yokohama can be found on this special pedestrian walkway, which crosses the Yokohama Bay Bridge to a circular observatory at the apex of the bridge, called the Sky Lounge. Along the Sky Walk itself are telescopes to improve the outstanding views of the port, Minato Mirai, Yamashita Park and many of the city's other top attractions. Start at Daikoku Pier and enjoy your walk in the clouds.
Open hours: call for details
Admission: charge 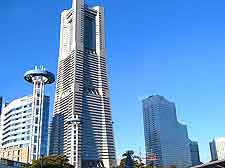 This dramatic, modern city of the future is Japan's first foray into deliberate urban planning, and the results are impressive indeed. No other site best represents Yokohama's growing skyline than the monolithic buildings of Minato Mirai, which appear to rise from the water's edge. Japan's tallest tower is here, as well as a high-tech convention centre, two excellent museums and the many attractions within Yokohama's Cosmo World amusement park. The shopping here is also world-class, with Queen's Square, Red Brick Warehouse and Landmark Plaza amongst the top draws. If you want to see the future of Japan, spend a day taking in the sights of this mini-city on the bay.
Open hours: daily - 24 hours
Admission: no charge 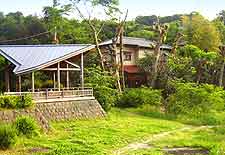 Address: 63-10 Oimatsucho, Nishi-ku, Yokohama, Japan, JP
Tel: +81 045 231 1696
More like a public park with exotic animals than a zoo, this popular Yokohama site is loved by everyone because it's free. A classic Japanese garden and leafy tree-lined avenues Nogeyama Zoo, which features 1,500 animals from around the world. After you've explored the main wildlife attractions, take a break in the garden, which bursts into life during the springtime, being filled with colour and blossoms.
Open hours: daily
Admission: no charge

Address: Hakkeijima Kanazawa, Yokohama, Japan, JP
Tel: +81 045 788 8888
Put an aquarium together with a seaside amusement park and you've got a full day of entertainment. Yokohama's very respectable Sea Paradise aquarium features all the usual suspects and fishy attractions, as well as big name stars such as polar bears and penguins. An underwater tunnel lets you get a more realistic perspective on the stingrays and colourful fish, and a handful of marine performances highlight the talents of seals and dolphins. The amusement park has a dozen or so thrilling rides, including a 105-metre / 350-foot freefall tower and a roller coaster that extends dramatically out over the bay.
Open hours: daily - 09:00 to 21:00, seasonal variations apply
Admission: charge 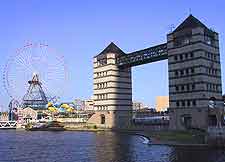 Address: Yamashita Koen, Yamashita-cho, Naka-ku, Yokohama, Japan, JP
Tel: +81 045 641 6591
Yokohama's other major amusement park has a nice setting in Minato Mirai, with a canal running right through the middle. There are plenty of modern action-packed rides and exciting attractions here, including a very cool simulation theatre and a roller coaster that plummets out of sight into the water. However, the real claim to fame at Cosmo World is its Ferris wheel, which is one of the largest on the planet.
Open hours: daily - 11:00 to 22:00, seasonal variations apply
Admission: charge for rides 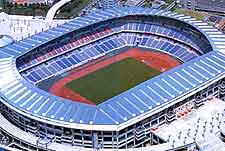 Address: Yokohama-koen, Naka-ku, Yokohama, 231-0861, Japan, JP
Tel: +81 045 661 1251
A prominent baseball stadium sited within the city's Naka ward, the Yokohama Stadium hosts many exciting games each year and can seat up to 30,000 people. Dating back to 1978, the stadium has become one of the city's biggest sporting attractions and is where its home team regularly play, the Yokohama Bay Stars.
Open hours: daily - 11:00 to 23:00
Admission: no charge, charge for events