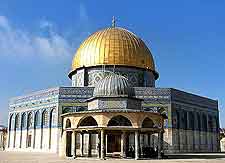 The religious sites and landmarks are the main reason people visit this city, with Jerusalem being home to some of the most pivotal Jewish and Muslim sites on the planet. Temple Mount overlooks central Jerusalem and features the iconic Dome of the Rock and Al-Aqsa Mosque. Thought by Jews to be where God created man, the mount is visited by thousands of followers annually.

Other spiritual landmarks and historical monuments not to be missed in Jerusalem include the Virgin Mary's Tomb, where the tomb attributed to the mother of Christ lies protected below a church and the Chapel of the Ascension, thought to be where Christ rose to heaven. Aside from these ancient and significant sites, there are dozens of centuries-old churches, synagogues and mosques waiting to be explored. 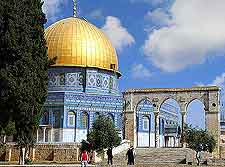 Dome of the Rock

Address: Temple Mount, Jerusalem, Israel, IL
Tel: +972 02 628 3393
Believed to be the place where Mohammed ascended to heaven and where Abraham chose to sacrifice his son, this iconic building has great significance to Muslims and Christians alike, and is one of Jerusalem's most visited landmarks. Constructed in 691 AD by Abd el-Malek, the structure's golden dome is visible across the city. It wasn't until the actual Crusader era that the Dome of the Rock was converted from an Islamic building into a Christian church.
Open hours: Sunday to Thursday - 08:00 to 17:00, Friday - 08:00 to 14:00
Admission: charge 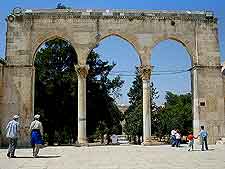 Address: Temple Mount, Jerusalem, Israel, IL
Tel:
This holy site of significance to both Muslims and Jews and is where the 2,000-year-old Western Wall, part of one of the two original temples that once sat on this site, still stands. Also known as the Noble Sanctuary, highlights at the Temple Mount include the Dome of the Rock and the Al-Aqsa Mosque. For Jews, this is where the world was created while the Temple is also mentioned in the Koran and the New Testament.
Open hours: Sunday to Thursday - 08:00 to 17:00, Friday - 08:00 to 14:00
Admission: free 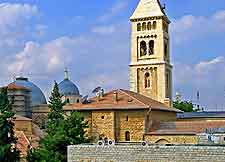 Church of the Holy Sepulchre

Address: Old City, Jerusalem, Israel, IL
Tel: +972 02 627 3314
Built at the end of the 'Way of Pain' and consisting of various chapels, some of which house tombs, the landmark that is the Church of the Holy Sepulchre is hailed by a number of churches to be the site where Jesus was buried. Christians gather here around the year for services and liturgies, and it is also a site of pilgrimage. The site was formerly occupied by a basilica constructed by Constantine in the 4th century, but construction on today's site commenced in the Crusade era after the basilica was razed by the Persians.
Open hours: daily - 08:00 to 17:00
Admission: free 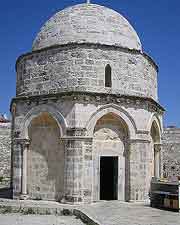 Chapel of the Ascension

Address: Jerusalem, Israel, IL
Tel: +972 02 628 4373
Thought by Christians to be the site where Christ ascended to heaven, this well-visited spot has been commemorated with a pretty octagonal-shaped chapel. During Jerusalem's Islamic period, the Chapel of the Ascension was converted into a mosque. Visitors to this landmark can also pay a visit the nearby burial site of the Christian Saint Pelagia.
Open hours: Saturday to Thursday - 08:00 to 17:00
Admission: charge

Tomb of the Virgin Mary

Address: Jerusalem, Israel, IL
Tel: +972 02 628 2936
Protecting the sacred tomb of the Virgin Mary is a church, just one of a series of landmarks that has sat on this spot to shelter the 1st century tomb below. Visitors can access the beautiful Tomb of the Virgin Mary via 50 steps, which also provide passage to the resting site of Queen Melisende and a chapel built in commemoration of Mary's parents.
Open hours: Monday to Saturday - 06:00 to 12:00 and 14:30 to 17:00
Admission: free

Address: Jerusalem, Israel, IL
Tel:
The largest synagogue in the city of Jerusalem, the Belz Synagogue has a capacity to hold 6,000 worshippers and features a ritual bath, a Yeshivah and a Rabbinical court, making it one of the city's most prestigious Jewish landmarks and sites of worship. Visiting Jews can attend Shabbat services on Fridays and admire the Czechoslovakian crystal chandeliers and the ark's 100 torah scrolls before or after services.
Open hours: daily
Admission: free 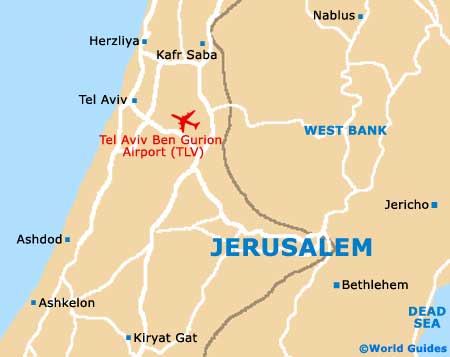