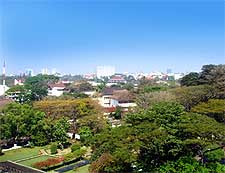 The tea plantation owners who once flocked to this resort city for holidays have now been replaced by residents of Jakarta, who escape the crowds and humidity of Indonesia's national capital for Bandung's relative coolness and calm on weekends. The lush Parahyangan mountains surround this 'flower city' some 770 metres / 2,526 feet above sea level.

Although evidence of human habitation has been found on the banks of the Cikapundung River and the Great Lake, the first written reference to Bandung dates back to 1488. Little is known of local history prior to the Dutch East Indies Company era. The first road between Bandung and present-day Jakarta was constructed in 1786. 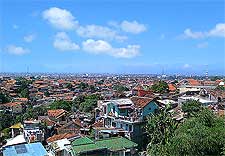 After Dutch East Indies Governor H.W. Daendels passed through Bandung during the early 19th century, while building the Great Post Road linking Java's east and west coasts, he wanted the Dutch East India Company moved to Bandung because of the city's strategic location.

An elaborate palace, mosque and meeting place were subsequently constructed in the city square facing the Tangkuban Perahu Mountain. 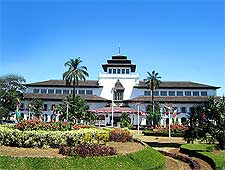 During the 19th century, Bandung flourished as an upscale European style resort complete with luxury hotels, elaborate ballrooms, and streets lined with sidewalk cafés and shops. Most of the people who frequented these places owned and lived in the surrounding plantations. Some of these plantations grew cinchona, one of the ingredients used to make quinine, while others grew tea and coffee. Far less wealthy, but no less important to the history of Bandung, were the Chinese workers brought in to help build the first major railway linking the city with Jakarta, which opened in 1880. Of note, the old Chinatown district still stands today. 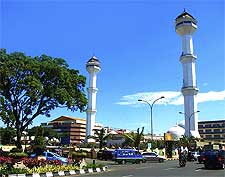 The Dutch East Indies finally began moving the colony's capital from Jakarta to Bandung at the start of the 1920s, but WWII and Indonesia's subsequent independence permanently halted these plans. After the Dutch attempted to reclaim Bandung in 1946, over 200,000 residents fled the city and burned it to the ground rather than surrender to the Dutch.

Ironically, the central government building originally intended as the new seat of the Dutch East Indies government served as the national parliament building for the newly independent Indonesia between 1955 and 1966, before Jakarta became Indonesia's permanent national capital. In 1955, Bandung also hosted the Asia Africa conference, the world's first international conference specifically for 'people of colour'. 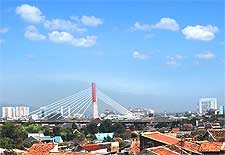 Bandung has grown dramatically since Indonesia's independence and now boasts countless modern shopping centres, as well as the world's fastest rollercoaster outside the United States.

Many of the buildings from the colonial history of Bandung remain standing, however, and much of its surrounding natural beauty is just a brief distance away. Nearby natural landmarks not to be missed include the volcano lake of Kawah Putih and the volcano crater of Tangkuban Perahu.