The waters surrounding Sulawesi really do contain some wonderful treasures and greatly influence the island's tourism, since they boast some of Indonesia's most outstanding snorkelling and scuba diving, particularly around the neighbouring island of Pulau Bunaken. For the latest up-to-date tourist information and the best choice of hotels, you will need to pay a visit to the biggest cities and resorts, such as Gorontalo, Manado, Palu and the southern capital, Makassar.

It is the island's coastline that understandably tends to be the biggest tourist magnet around Sulawesi, with the white powdery beaches being at their best on the Togean Islands (Togian Islands) and around South Sulawesi. The south shore is where you will find the appealing beach resort of Pantai Bira, which is known for its boat building, traditional weaving and fishing, as well as its colourful coral reefs and rich marine life. In Central Sulawesi, the Banggai Islands are worth exploring and often disregarded in favour of the Lore Lindu National Park, the Morowali Nature Reserve and the Tanjung Api National Park. Further national parks and wildlife reserves await tourists in North Sulawesi and include the Bogani Nani Wartabone and the Tangkoko Batuangas Dua Saudara. The natural beauty within the Mamasa Valley is quite hard to describe and really does need to be experienced firsthand. More information about Sulawesi Tourist Attractions.

The peninsulas of Sulawesi are dominated by various landmarks, which include striking volcanoes and mountains, as well as historical temples and fortresses, such as Fort Rotterdam and the Mandala Monument at Makassar. In North Sulawesi, the Gunung Klabat Volcano is hard to overlook and if you have to time to trek along the pathway to the very top, you can enjoy the sumptuous views and lush rainforest scenery. Other prominent volcanoes on the island include the Gunung Colo on Pulau Una Una, the Gunung Lokon at Tomohon, and the Gunung Sesean at Tana Toraja. History buffs should pay a visit to the Christian town of Manado and marvel at the 19th-century Buddhist temple that is the Kienteng Ban Hian Kong. More information about Sulawesi Landmarks and Monuments.

Cultural information about the heritage of Sulawesi is in good supply within the island's multitude of museums. On the south peninsula and in Makassar, the Museum Negeri La Galigo and the Museum Balla Lompoa (Beteng Sungguminasa) stand out. Also in the south is the Museum Lapawawoi, a magnificent former palace residing on the island of Pulau Selayar, in the town of Watampone. In Manado, on the far tip of the northern peninsula, the Museum Negeri Propinsi Sulawesi Utara enjoys a very central location and features an interesting collection of traditional relics, costumes and artefacts. More information about Sulawesi Museums.

In all directions around Sulawesi are various Indonesian islands and possible excursions, suiting those wishing to explore further destinations, although most are best reached by a short flight. The pristine beaches of Bali are nothing short of gorgeous, while the coastline around the island of Lombok is also rather special, with its southerly shore being ideal for surfers. Other options include hopping over to Kalimantan, venturing to the Maluku Islands, or experiencing the volcanic crafter lakes on the small island of Flores. More information about Sulawesi Attractions Nearby. 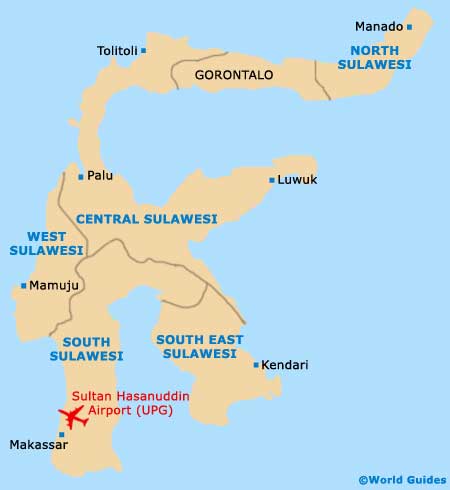