The Maluku Islands archipelago, or the Moluccas as they are often affectionately referred to, encompass a popular region of Indonesia and reside between Papua and the island of Sulawesi. Maluku really is nothing short of an Indonesian paradise and appeals to most sun seekers and holiday makers, since its white sand beaches really area quite special.

Many tourists come to the Maluku Islands each year, to take full advantage of its world-class coral gardens and exceptional snorkelling, although its remote location ensures that its tourism scene remains pleasantly understated. Tourist information is readily available at most resorts on the main islands, such as Ambon, Bacan, Halmahera, Morotai, Seram, Ternate and Tidore, as well as the Banda Islands, Kei Islands and the Tanimbar Islands.

What you choose to do on the Maluku Islands depends really upon where you choose to base yourself, although most of the Moluccas do boast dreamy beaches, a number of which appear to be quite deserted and almost undiscovered. The beaches of Pulau Ambon (Ambon Island) are particularly good around its leading resort of Kota Ambon, where the bayfront and mountainous backdrop are major Maluku highlights. Scuba diving around the Pulau Ambon is also very notable, with further reliable dive spots and snorkelling opportunities being based around the Banda Islands and the Lease Islands. On the Pulau Halmahera (Halmahera Island), the top attractions include volcanoes, hiking trails, stilt houses and offshore islands, such as the Pulau Kumo. More information about Maluku Tourist Attractions.

Spread around the islands of Maluku are a series of striking landmarks, temples, mosques and palaces, as well as waterfront fortifications dating back to the Dutch and Portuguese eras. There are two magnificent cathedrals within Kota Ambon, as well as the Benteng Victoria Fortress and the Mesjid Jami Mosque. On the Banda Islands are some characterful period houses from the 19th century, some of which are open to the public and appear more like museums. One of the oldest standing religious structures on the Maluku Islands is the Ebenhaezer Church on the Pulau Nusa Laut, which was built around 300 years ago. Nearby, the Benteng Beverwyk Fortress embodies many strong elements of late-17th century Dutch architecture. More information about Maluku Landmarks and Monuments.

Offering a large collection of colonial memorabilia and local artefacts, the Siwa Lima Museum on the island of Pula Ambon is one of Maluku's best museums and enjoys rather splendid bayfront panoramas. Other cultural attractions include the Sangar Budaya Seram Museum on the Pulau Seram, where you will discover information about the fabled Nau-ulul ceremonies. On the Pulau Tidore, the Sonyine Malige Sultan's Memorial Museum is famed for its valuable antiquities and sultan treasures, and is near to both the Benteng Tohula Fortress and the Royal Citadel (Istana Sultan). More information about Maluku Museums.

You could easily while away an entire holiday hopping around the islands of Maluku and reclining on their pristine beaches. However, if you would like to experience different parts of Indonesia, then do consider a flight or long boat trip to either the island of Sulawesi or to Western Papua. Sulawesi lies to the west of the Maluku Islands and is known for its national parks and beautiful coral reefs, while Western Papua is to be found to the east and comes with peaceful beaches, hiking trails and wildlife reserves. More information about Maluku Attractions Nearby. 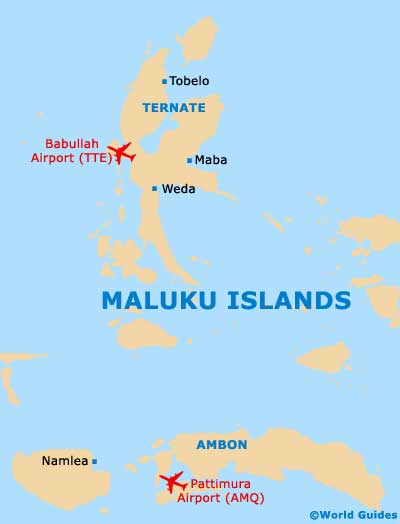