The Gambia Restaurants and Dining 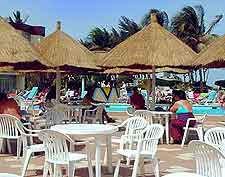 Eating out in The Gambia can be a great experience whatever your budget. The Gambia boasts a large variety of eateries, ranging from casual beach bars and family-run restaurants to more formal dining rooms offering international cuisine. Indeed, high class restaurants have become a much more common sight on the Gambian dining scene of late. 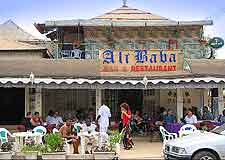 Rice is the daily staple for many Gambians. It is usually served with a spicy sauce or stew made from fish, chicken, beef or lamb, along with vegetables. Peanuts also feature in many Gambian dishes, often being grated into stews or added as a paste. Another traditional dish is 'yassa poulet', comprising grilled chicken with onions and lemon.

A popular accompaniment to stew is 'fufu', a dish of mashed yams that is delicious to eat and fascinating to watch being prepared. Couscous and steamed millet are also commonly found on menus in The Gambia. An alternative to look out for is a type of porridge known as 'chura gerrte'. 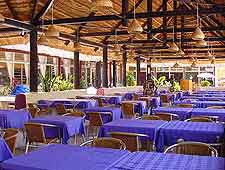 Those who take their food seriously should try out one of The Gambia's more upmarket restaurants. These include the Butcher's Shop and the Ngala Lodge, both of which reside in Fajara, on the Kairaba Avenue and the Atlantic Boulevard respectively. The latter offers fantastic views as well as fine Mediterranean-style food. The Avocado Restaurant in Kololi is also highly regarded.

Many of the main tourist hotels, including the Kombo Beach Hotel, the Sene Gambia Hotel and the Ocean Bay, have at least one restaurant of their own. 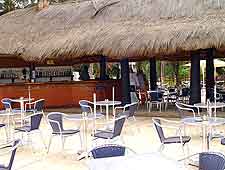 At the budget end of dining out, The Gambia offers plenty in the way of street food. Wherever you go, you will be tempted to try out a takeaway served Gambian style, whether it is a plate of grilled meat and chips or a bowl of vegetable stew.

For most visitors it is a case of choosing between the various beachside family restaurants and bars that cater for The Gambia's tourists. The majority of them are concentrated in Kololi and the surrounding resort area. Kairaba Avenue is also home to a large number of dining establishments and cafes. It is worth noting that the capital city of Banjul offers a very limited selection of restaurants, considering its status.