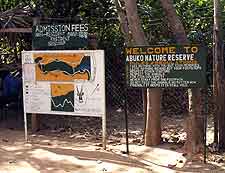 The Gambia has taken its environmental conservation role seriously since the 1970s, when it became clear that many native African wildlife species were fast disappearing. The first protected area to be set up was Abuko Nature Reserve.

The best time of day to visit The Gambia's national parks and nature reserves is during the early morning or late afternoon. At midday, most animals have headed for a quiet shady spot where they are much harder to spot. Animals and birds are also generally easier to spot during the dry season, when vegetation is less abundant. 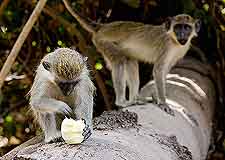 Address: Lamin, The Gambia, GM, Africa
Tel: +00 220 778 2633
Just 25 km / 16 miles from Banjul, this is one of The Gambia's more accessible reserves and hence perhaps the busiest in terms of tourists. Visitors to the Abuko Nature Reserve may catch a glimpse of antelopes, crocodiles and monkeys, as well as a host of exotic birds, including the Senegal parrot, pied kingfisher and the evocatively named sun bird. Two hides offer an excellent opportunity to photograph and observe animals and birds.
Open hours: daily - 08:00 to 18:00
Admission: charge 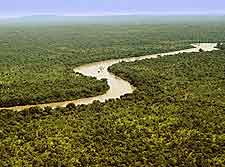 Address: Near Medina Chamen, The Gambia, GM, Africa
The River Gambia National Park is actually made up of a series of five individual islands, which are mostly forested and swampy. It is perhaps best known for its population of around 50 chimpanzees. However, warthogs can also often be seen, along with the guinea baboon, aardwark and Nile crocodiles.
Open hours: daily - 08:00 to 18:00
Admission: charge 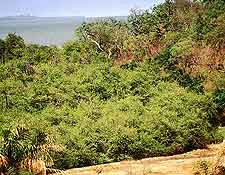 Address: Dumbuto, The Gambia, GM, Africa
Kiang West's park was set up in 1987. Today, it is one of the largest of The Gambia's protected nature reserves and is home to the greatest diversity of animal life. Kiang West covers an area of approximately 11,500 hectares / 28,400 acres and is known for its mangrove creeks and expansive tidal flats.
Open hours: daily - 08:00 to 18:00
Admission: charge 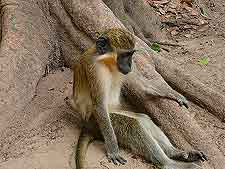 Address: Kololi, The Gambia, GM, Africa
Bijilo Forest Park is just a short walk from Senegambia beach, making this an ideal day trip out for visitors staying in and around Kololi. The rainforest environment of the park attracts over 100 species of birds and four primate species. Growing beneath the abundance of Rhun palm trees is a colourful array of lilies and wild orchids.
Open hours: daily - 08:00 to 18:00
Admission: charge

Address: Near Banjul, The Gambia, GM, Africa
Niumi National Park is a coastal reserve that stands as one of the last untouched mangroves on the West African coast. The park serves as a base for many European migratory birds, including 17 species of warblers. Waders are also attracted to the tropical swamps and tidal flats. Leopard, spotted hyena and crocodiles can often be spotted, along with green turtles which nest and lay their eggs along the coastal strip. Perhaps the most notable of the park's residents though are the West African Manatee and the African Clawless Otter.
Open hours: daily - 08:00 to 18:00
Admission: charge

Address: Tanji, The Gambia, GM, Africa
Located along the coastal stretch of western The Gambia, Tanji features everything from dunes and lagoons to mangroves and woodland. This important bird reserve was established in the early 1990s and has become a popular destination for African birdwatchers, because of the rich variety of bird species to be found there. Many locals simply refer to the Tanji River Bird Reserve as the 'Karinti'.
Open hours: 08:00 to 18:00
Admission: charge