The Gambia Maps and Orientation 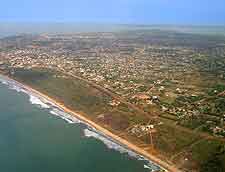 The smallest country in the whole of mainland Africa, The Gambia is located within Western Africa, where it is surrounded on its northerly, southerly and easterly sides by Senegal. However, it is the western side of The Gambia where most tourists head, since this part of the country borders the Atlantic Ocean and is lined with popular beaches and holiday resorts.

The Gambia River flows through the country, forming a scenic valley, being lined with cities, towns and villages. Some of the biggest destinations include Bansang, Bakau, Brikama, Ghanatown, Gunjur, Kartong, Kololi, Sanyang, Serekunda (Serrekunda), Tanji and Tujering, as well of course as the capital city of Banjul.

Visitors to Banjul will soon realise that although this is the capital of The Gambia, it is a relatively small city and more like an African town in its appearance. The centre of Banjul is based around the July 22 Square and from this point, a number of prominent roads head southwards, such as Russell Street, which passes by the vibrant Albert Market and ultimately connects Liberation Street.

If you are planning to tour The Gambia, then maps are a worthwhile item of luggage. Many tourists plan their excursions well in advance, while others are quite content to spend their holiday simply relaxing on the beachfront, next to their hotel.

Map of The Gambia 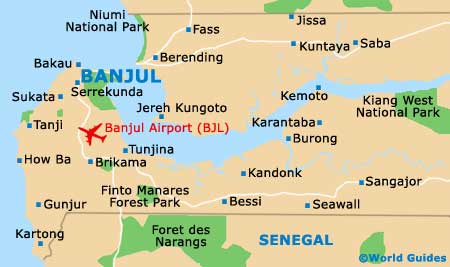