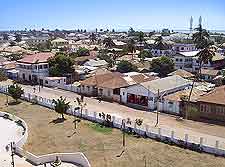 The best way to navigate around this narrow strip of a country is to use the meandering River Gambia as your landmark. Indeed, The Gambia is divided into five divisions, Lower River, Central River, North Bank, Upper River and Western, as well as the city of Banjul.

Featuring a population of approximately 35,000 residents, Banjul is the capital city and is to be found on St. Mary's Island, while the Greater Banjul Area is considerably larger and is called home by almost 400,000 people.

As you head away from the coast to towns in the east, you will arrive in an area of The Gambia that is generally referred to as 'Upcountry'. 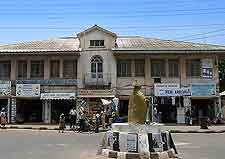 Banjul may seem tiny in comparison to most African cities, overshadowed as it is by its larger urban neighbours. Nonetheless, most visitors to Banjul can't help but be captivated by its combination of rather worn-out colonial charm and African-style hustle and bustle. Albert Market is always a big draw for tourists, along with Arch 22 and the National Museum. More information about Banjul. 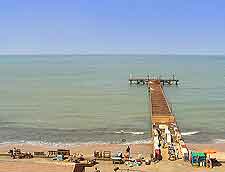 Bakau is a relatively small town on the coast. It is a well-known retreat for businessmen and their families from the nearby city, as well as a regular haunt for travellers and tourists.

Cape Point is Bakau's most popular beach. An essential destination on most visitors' itineraries is a visit to the Katchikali crocodile pool nearby. 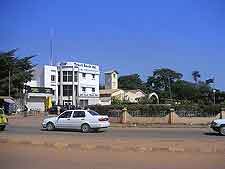 Located just 12 km / 7 miles from Bajul, Serekunda is The Gambia's most populated city and a major business and trading centre for the country. Serekunda's market is a lively place to visit and gives visitors a real taste of life in a busy West African town.

More adventurous travellers might like to venture along the River Gambia to the Gambian town of Basse Sante Su. Located some 375 km / 233 miles from Banjul, the town is a great place for birdspotters. There are also lots of historic buildings to admire, most of which were built during the colonial era. Once a week, the town really comes alive with the arrival of the local market. 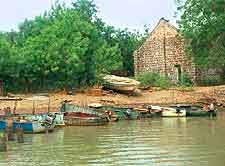 Founded in 1823 as a settlement for freed slaves and formerly known as Georgetown, Janjanbureh's buildings still bear some evidence of its past, including old colonial buildings and a slave house. The town is also known for its significant crop of peanuts. Many birdspotters come to the nearby Bird Safari Camp.

One of The Gambia's larger towns, Brikama is located south of Banjul. The town is renowned for its craft market. Brikama also makes a good base for travelling to attractions in the area, including the nearby Makasutu Cultural Forest and the Pirang Forest Park.