The Gambia Capital City, About Banjul Tourism and Travel 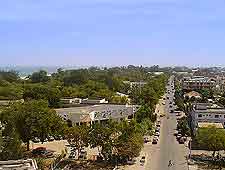 The Gambian capital of Banjul is located at the mouth of the River Gambia, on St. Mary's Island. This small city offers an eclectic mix of colonial architecture, contemporary office blocks and areas of traditional housing. Banjul also offers plenty in the way of African charm and atmosphere, with a little tourism thrown in for good measure.

Banjul doesn't have too many tourist attractions, although there is certainly more than enough to keep visitors interested for a few hours at the very minimum. Not least, it is worth spending some time simply soaking up the atmosphere of this small African city. 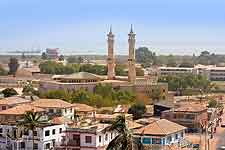 Formerly known as Bathurst, Banjul was founded at the beginning of the 19th century as a British military post. Its main aim was to bring to an end the slave trade there. The city also quickly established itself as a trading post

When The Gambia gained its independence in 1965, Banjul was named as the official capital city. It wasn't until 1973, however, that the name of Bathurst was finally dropped, to be replaced by Banjul. On 22nd July, 1994, Banjul was the scene of a 'coup d'état'. 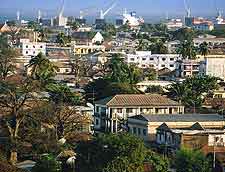 Banjul is remarkably small for a capital city, although enjoys its status and boasts no less than two cathedrals, a number of magnificent mosques and a thriving port, where large quanities of peanut-related products are regularly shipped out. However, the nearby urban conglomeration of Serrekunda is home to almost 170,000 people. Banjul is made up of two districts - Banjul (the city centre), and the district of Kanifing, which joins with Serrekunda nearby.