The Gambia Landmarks and Monuments 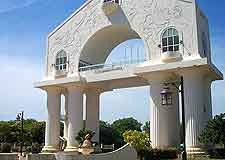 For visitors to the city of Banjul, capital of The Gambia, the Arch 22, Fort Bullen and the Banjul State House are popular sights to see and serve as three of the city's most prominent landmarks. On James Island, the remains of Fort James are of great historical significance. 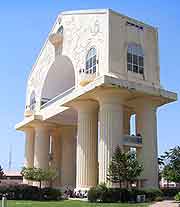 Address: July 22 Drive, Banjul, The Gambia, GM, Africa
Arch 22 is the tallest structure in The Gambia, reaching 35 m / 114 feet above the city streets of Banjul. Built astride the Banjul-Serrekunda Road in 1996 to commemorate the military 'coup d'état' that brought President Yahya Jammeh into power, it is certainly worth closer inspection. The arch itself is actually made up of three floors, accessible by spiral stairs and elevators. From the second floor, it is possible to get great views over the whole of Banjul. There's also a small cafe and shop. Near the base of Arch 22 is the statue of an unknown soldier.
Open hours: daily - 09:00 to 23:00
Admission: charge

Address: Banjul, The Gambia, GM, Africa
Tel: +00 220 422 3811 (general enquiries)
Banjul's most impressive building is the State House, built by the Portuguese and today still serving as the seat of government in the country. The Banjul State House is also the office of the country's president and is often used for official functions and meetings.
Open hours: Monday to Friday - 09:00 to 17:00
Admission: free 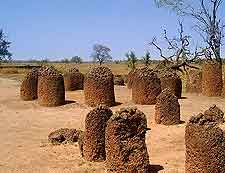 Address: near Kuntaur, The Gambia, GM, Africa
Stone circles can be found in remarkably large numbers on the north bank of the River Gambia. Of all the Senegambia Stone Circles, the Wassu Stone Circles are seen as one of the more important gatherings and certainly the most visited of them all. Widely believed to be ancient burial sites, the stones are huge, with the tallest one measuring some 2.5 m / 8 feet in height. Visitors can find out more about the stone circles in Wassu's visitor centre.
Open hours: daily
Admission: charge 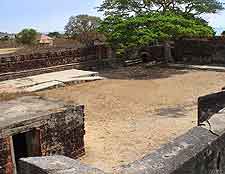 Address: Banjul, The Gambia, GM, Africa
Built at Barra Point in the early 19th century, Fort Bullen had one aim - to fight off French slavers as they headed up the River Gambia and thus to enforce the British ban on slavery. After a period of abandonment, the fort was brought into action once again during World War Two, when it was put into use as an observatory and base for British artillery. Today, Fort Bullen remains one of The Gambia's best preserved historic monuments.
Open hours: daily - 09:00 to 17:00
Admission: charge 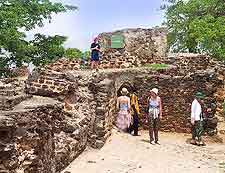 Address: James Island, The Gambia, GM, Africa
Fort James lies in ruins today. However, it is still possible to get a sense of the history of the place and imagine what it must once have looked like. Built in the mid-17th century, Fort James was where many slaves were housed as they waited for ships to take them to the Americas. As such, the fort remains an important historic site and landmark. At other times in its turbulent past, the fort has been variously held by the British, as well as the French and Dutch authorities.
Open hours: daily
Admission: charge