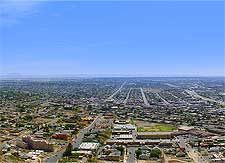 The known history of El Paso dates back to the pre-Columbian era, when indigenous tribes such as the Suma and Jumano Indians roamed the region. Their presence was identified by the archaeological discovery of huecos - rock cavities used to pound maize and hold water.

Visitors interested in the earliest El Paso inhabitants can learn more by checking out the Hueco Tanks site, or by exploring the Museum of Archaeology at the Wilderness Park.

The roaming tribes eventually became part of the area's Mestizo culture and were first discovered by the Spanish at the end of the 16th century. By 1659, the conquistadors had established their first settlement in what is now known as Cuidad Juárez. Located on the south bank of the Rio Grande, this settlement quickly grew to become the largest Spanish center in New Mexico, until El Paso became part of Texas in 1850.


Apache Indians inhabited the land to the north of the Rio Grande and during the 1700s, they fended off several Spanish attempts to exert their influence over Indian territory. The Rio Grande served the Apaches well, providing them with a natural defense against the Spanish.

The earliest recorded arrival of American settlers was in 1804, when some American traders arrived and married into the most elite Spanish families. By 1824, the first agricultural enterprises had begun on the north bank of the river. The city avoided any direct conflict during the battle for Mexican independence, but it was a difficult time in the history of El Paso nonetheless.

Combat in other parts of New Mexico meant that the city's blossoming wine trade was brought to an abrupt halt. The first Mexican Constitution ceded El Paso del Norte to the Mexican state of Chihuahua, but the state's dominance was short-lived, as the Compromise of 1850 led to the redrawing of the current New Mexico-Texas border. The compromise incorporated settlements on the north bank as part of Texas. 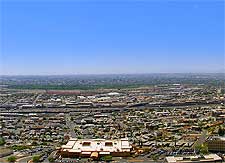 The Growth of New El Paso

Following the Compromise of 1850, a military post and an overland mail service were quickly established on the north bank of the river. This military post eventually grew into Fort Bliss, which is presently the largest US military base in the world. The Civil War (1861 to 1865) had little effect on El Paso. With a small Confederate force present here, the city was easily captured by Union forces in 1862. In 1873, El Paso was incorporated as a city. In 1888, Mexican El Paso, across the river, was renamed Cuidad Juárez in order to avoid increasing confusion about the names of the two settlements.

The late 19th century was a rough time in the history of El Paso, as the community became a thriving frontier town. Like similar frontier towns, it attracted a significant criminal element, meaning that prostitution venues, gambling dens and bars became part of the city's landscape. Despite the efforts of hard-line marshals such as Dallas Stoudenmire, sex and gambling continued until WWI. At this time, a crackdown forced these activities over the border into Cuidad Juárez. 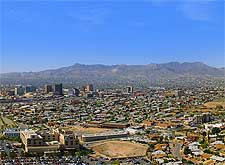 The Mexican Revolution brought a large number of middle-class refugees into the city from 1910 onwards. It is thought that around 60,000 Mexicans crossed the border to escape the carnage. Their influence led to the establishment of a number of Spanish-language cinemas, churches and schools.

El Paso continued to live up to its boomtown status during the 1920s and 1930s, when the first high-rise hotel was opened by Conrad Hilton. The hotel still exists to this day in the form of the Plaza Hotel. Meanwhile, the Plaza Theater was built at around the same time and remains one of the best-known sights in El Paso.

The city declined somewhat during the Great Depression through to WWII. However, the discovery of oil and a successful copper industry meant that El Paso boomed again until 1980, when the copper-smelting plants began to close. Nowadays, the local economy primarily relies on cross-border trade and the growth of the Fort Bliss military base.