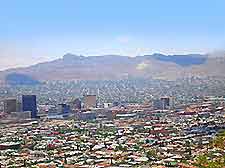 Standing on the far-western side of Texas, El Paso is close to Mexico, which lies across the spectacular Rio Grande River. El Paso has become a large city and is one of America's oldest settlements, being full of history and heritage, often with a Mexican feel.

Although much of downtown El Paso is not particularly well organized or attractive, the nearby Franklin Mountains and Chihuahua Desert sets this city apart from many others in Texas. Numerous excursions and day trips are possible and the region is becoming increasingly popular as a destination for tourists, with restaurants specializing in Mexican cuisine.

Tourism in El Paso is embraced and has become an increasingly important area of city life. The main tourist information outlet in the area is the El Paso Visitors Center at the Civic Center on Santa Fe Street. Home to a range of basic travel and tourism advice, the visitors center offers a useful map, lodging advice and leaflets about the city's main historic tourist attractions. 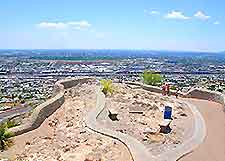 Hotels in El Paso offer a range of accommodation to suit all budgets, being particularly clustered around the city's downtown area. Further hotels are located throughout the city, on the outskirts, in nearby Juarez, and close to the El Paso International Airport (ELP). More information about El Paso Hotels.