Getting Around, Austin Travel, Transport and Car Rental 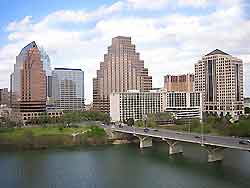 Austin has two airports within easy driving distance of downtown. The airports receive numerous, albeit domestic, flights throughout the day, with good ground travel and transport options available. Austin's major interstate highway, I-35, serves Austin after running through Dallas from the north and San Antonio in the south, while the 290 and I-10 provide east-west access.

Greyhound buses and Amtrak trains both serve Austin on a regular schedule from major interstate destinations in the US. Travel within the city of Austin is fast and efficient, owing to the excellent network of Metro buses.

Address: Barbara Jordan Terminal, 3600 Presidential Boulevard, Austin, Texas TX, 78719, USA
Tel: +1 512 530 2242
Lying just southeast of downtown Austin, the new Austin-Bergstrom International Airport receives some international carriers, but is mostly reserved for domestic flights, with the majority of flights from overseas arriving at Houston or Dallas airports instead. Non-stop flights travel to Austin from all over the US, including Washington D.C., Chicago, Las Vegas, Los Angeles, New York and Salt Lake City. Taxi travel to Austin city centre takes about 20 minutes, while shuttle services and Metro buses 100 and 350 travel to and from the airport from Monday to Friday for much less than the price of a taxi, although the journey takes twice as long. For further information, please refer to the Austin Airports page. 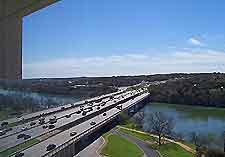 There are major car rental companies at both of Austin's airports and you can travel to downtown along the Austin-Bergstrom via Highway 183 and East Riverside Drive. Travel by car is straightforward as the north-south I-35 runs through Dallas on its way here and onto San Antonio, while the east-west I-10 from Los Angeles meets with Highway 290, which provides travel through Austin on its way to Houston. Parking is at a premium in downtown Austin and you will have to make use of parking garages.

There are several daily bus departures from Dallas, Houston and San Antonio to Austin with a journey time of about four hours, three hours, and one hour and 30 minutes respectively. Greyhound buses travel from the fairly remote Kerrville Bus Company station in East Koenig Lane, to the north of downtown in Austin, which is accessible from downtown by bus number 7. Capital Metro is the city's public bus network, with several inexpensive routes within downtown and express routes out to the suburban neighborhoods. Look out for the free Dillos buses that serve some downtown routes.

You can get to Austin by train from Chicago and Los Angeles and all points in between by the Texas Eagle (from Chicago) and the Sunset Limited, which travels between Miami and Los Angeles. The Amtrak station in Austin is close to downtown on North Lamar Boulevard and trains also travel from Austin to and around the Texas Hill Country, to the west of the city.

There are numerous efficient taxi companies that travel to and from both airports to destinations across the city. Taxis in Austin can also be requested by telephone.