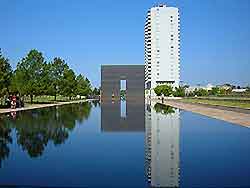 Without a doubt, Oklahoma City's most significant monument is the Oklahoma City National Memorial, an impressive memorial to those who were killed in the bombing of the Alfred P. Murrah Federal Building on April 19, 1995. The former site of the building is now home to two golden hued gates, 168 empty chairs and a reflecting pool, while a museum on the tragedy is situated behind.

This somber Oklahoma City memorial is an essential part of any visit to the city, which was and still is affected by the Oklahoma bombings. Other important Oklahoma City landmarks include the city's religious structures, the State Capitol building plus various historic homes along with several buildings belonging to Oklahoma City University. 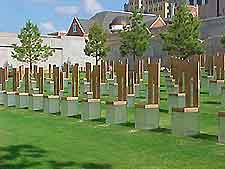 Address: 620 North Harvey Avenue, Oklahoma City, Oklahoma OK, 73102-3032, USA
Tel: +1 405 235 3313
This imposing memorial remembers the victims and survivors of the tragic 1995 Oklahoma City bombing that occurred at the Alfred P. Murrah Federal Building. The Oklahoma City National Memorial consists of 168 empty chairs representing those who lost their lives in the bombing, two huge granite structures called 'The Gates of Time', a reflecting pool of water and the National Memorial Fence, with pictures and messages to the deceased. There is also a museum located on-site.
Open hours: daily - 24 hours
Admission: free 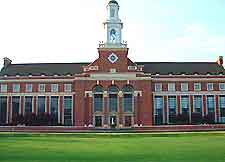 Address: NW 23rd and Blackwelder, Oklahoma City, Oklahoma OK, 90071-1504, USA
Tel: +1 405 521 5354
With the entire university campus listed on the National Register of Historic Places, it is of no surprise that the university is one of Oklahoma City's most prominent landmarks. Established in 1903, the Gothic memorial library and administration buildings are the university's architectural highlights.
Open hours: daily
Admission: free

Address: 405 NW 15th, Oklahoma City, Oklahoma OK, USA
Tel: +1 405 528 8485
The Victorian-style home of Henry Overholser has become an Oklahoma landmark and contains some impressive architectural features as well as imposing interior fixtures and fittings. Built in 1903, the mansion offers French stained glass windows and Antwerp oak paneling, and visitors can take a guided tour of the building.
Open hours: Tuesday to Friday - 10:00 to 16:00, Saturdays and Sundays - 14:00 to 16:00
Admission: charge, discounts for seniors and children, children under six free

Address: NE 23rd and Lincoln, Oklahoma City, Oklahoma OK, 90012-2180, USA
Tel: +1 405 521 3356
Built from 1914 to 1917, Oklahoma City's neo-Classical State Capitol building remained unfinished for 85 years due to lack of finance and for most of this period it was the only state capitol building without a dome. The dome was finally added according to the original architect's design and the views looking up at the dome from the interior of the building are exquisite. The exterior of the dome is topped by 'The Guardian', a statue of an American Indian by Enoch Kelly Haney.
Open hours: daily
Admission: free

A Tribute to Native Americans

Address: Centennial Plaza, Oklahoma City, Oklahoma OK, 90002-3621, USA
Situated next to the Oklahoma City State Capitol building in Centennial Plaza, this statue pays tribute to Native Americans and the positive contributions they have made to the state of Oklahoma, with the state having the largest Native American population of any US state. Designed and made by Allan Houser, a Chiricahua Apache, the monument is titled 'As Long as the Water Flows', referring to the forced relocation of many American Indians.
Open hours: daily
Admission: free 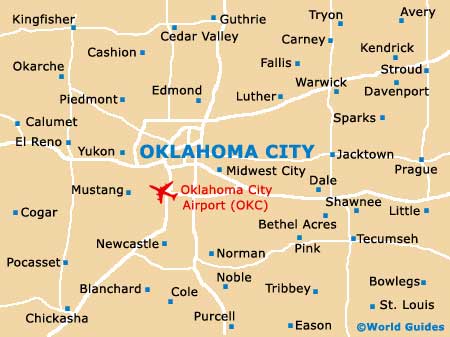