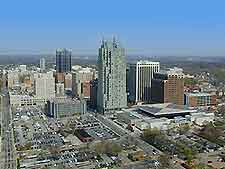 The capital city of Raleigh stands in North Carolina (NC) and was founded in 1792. Raleigh is located in the very heart of the state and city life is focused around the large, pedestrianized Capitol Square, which stands in Raleigh city center.

Part of the Research Triangle trio of college towns, which also includes nearby Durham and Chapel Hill, Raleigh is home to the prestigious North Carolina State University. Raleigh also features a number of notable tourist draw cards, which include museums, important institutions, the cobbled City Market and a vibrant cultural scene. 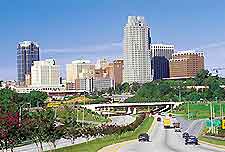 The city of Raleigh and surrounding areas embrace tourism and visitors are always made to feel welcome. The main tourist information centers in Raleigh are the Capital Area Visitors Center on North Blount Street and the Convention and Visitors Bureau along Fayetteville Street. Both of these tourism centers offer a wealth of advice, services and brochures, with information about Raleigh main tourist attractions and a popular self-guided walking tour map of Raleigh's Historic Oakwood district and government buildings.

Home to an extensive range of accommodation, hotels in Raleigh are varied and suit all requirements, with many being located in the very heart of the city center. Additional hotels in Raleigh can be found around the Glenwood South area, in the Historic Oakwood and Warehouse districts, throughout Cameron Village and in many neighboring cities and towns, including nearby Durham and the Research Triangle Park. To the northwest of the city, further hotels are situated close to the busy Raleigh-Durham International Airport (RDU). More information about Raleigh Hotels. 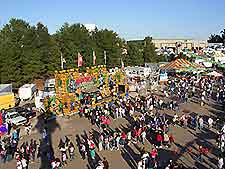 Some of Raleigh's main museums and art galleries include the North Carolina Museum of Art - offering a magnificent selection of masterpieces from all over the world; Exploris - a fascinating museum featuring a giant IMAX screen; Raleigh's North Carolina Museum of History - dedicated to the area's history, with a popular Sports Hall of Fame; and the Joel Lane Museum House - with tours of this stunning 18th-century house and grounds. More information about Raleigh Museums and Art Galleries.