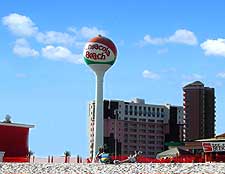 None of the Florida Panhandle's major cities lie farther west than Pensacola, which is frequently called the 'City of Five Flags'. This is because five different federal governments have presided over the city since it was established as the United States' first European settlement in 1559.

The city's name comes from its original Muskogean-speaking residents, whom the Spanish called the Pensacola.

Although Pánfilo de Narváez was the first European explorer to sail into the Bay of Ochuse in 1528, followed by Hernando de Soto in 1539, the history of Pensacola really only began when the community was officially established in 1559. The city's founder was a Spanish soldier named Tristán de Luna y Arellano, who brought more than 1,400 people with him, aboard 11 ships.


Sadly, the first permanent settlement in Pensacola history was abruptly destroyed in a 1559 hurricane. Five ships sank beneath the Bay of Ochuse and hundreds of lives were lost. The 1,000 survivors abandoned the town altogether in 1561 and headed north to Santa Elena, in present day South Carolina, only to face another devastating hurricane. The remaining survivors returned to Mexico and northwest Florida was considered unsafe for permanent settlement for over a century. 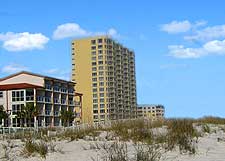 The Spanish once again attempted to settle nearby when they established a fortified town close to Fort Barrancas in 1698. Three fortified bases called 'presidios' were built during this time in local history, to defend the community against the French, who wanted the region to be part of Louisiana. The French burned Pensacola during its brief occupation of the region between 1719 and 1722.

Pensacola was again Spanish territory between 1722 and 1763, the year the British won control of the region following the French and Indian War (1754 to 1763). The British named their new colony West Florida and made Pensacola its capital. The Spanish reclaimed the city and the rest of West Florida during the 1781 Battle of Pensacola, but sold its Florida territories to the United States in 1819. 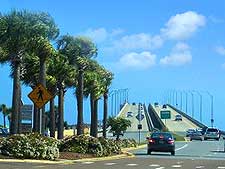 By the time Florida became an American state in 1845, Pensacola was economically stronger than St. Augustine. When Florida voted to join the Confederate States of America in 1861, Fort Pickens stayed under Union control. A Union Bay of Pensacola blockade prevented supplies from entering or leaving the bay during most of the American Civil War (1861 to 1865). 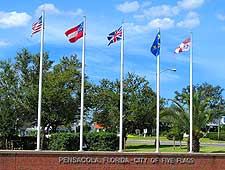 The Arrival of the 20th Century

After Pensacola rejoined the United States in 1868, the city gained prominence for its renowned red snapper fish, pine lumber and military presence in its port. These industries are depicted in greater detail at the Pensacola Museum of Industry on East Zaragoza Street.

The city's greatest natural resources, its beautiful beaches, were not fully accessible until modern bridges were built across the Bay of Pensacola. A 1972 law prevents these unspoilt beaches from becoming overdeveloped. Today, the city often feels more like an extension of neighboring Alabama than the more southern parts of Florida. 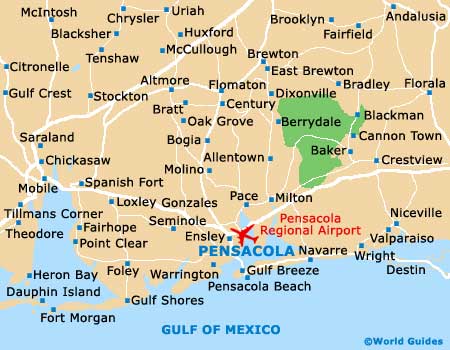