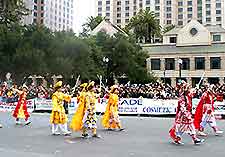 San Jose may only be a side-kick to the Bay Area's real attraction of San Francisco, but it certainly won't disappoint you with its popular festivals, events and long list of things to do.

There are arts and crafts, cultural attractions and music events galore in San Jose. Jazz is widely loved here and there are several jazz events throughout the year, while sports lovers are also well catered for.