Fairbanks Weather, When to Go and Climate Information 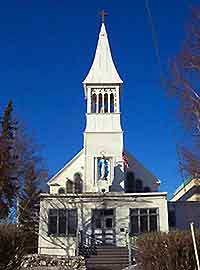 The weather and climate in Fairbanks is extremely seasonal, with big variations in temperature each day and month, fluctuating by up to 55°C / 100°F every year. Summer weather in Fairbanks is generally warm and sunny, although the winters are harsh, with a bitterly cold climate and months of frosty weather.

Rainfall in the Fairbanks area is light throughout the year and sunny weather during the summer months of June, July and August results in highs of 23°C / 74°F. During late July and early August, the climate in Fairbanks can be surprisingly hot, with temperatures peaking as high as 27°C / 80°F, or on occasion, even reaching 32°C / 90°F.

Night temperatures during summers in Fairbanks drop sharply and it is always advisable to be prepared for cool evenings. On occasions, freak snowy weather has been known in the valley areas of Fairbanks as late as July and August. The longest day in Fairbanks is the 21st June, when the sun sets for just two hours and the nights are more dusky than dark.


Autumn weather arrives quickly in Fairbanks and temperatures soon begin to drop, with the climate becoming noticeably cooler. Average autumn temperatures in Fairbanks range from daily highs of 13°C / 55°F during September, soon dropping to around -11°C / 12°F in November.

Winter temperatures remain freezing for several months in Fairbanks and snowy weather can be heavy, with average daytime temperatures in January dropping to -18°C / -28°F, and often lower. However, perhaps the hardest part of winter weather in Fairbanks are the extremely short days and lack of daylight, although the dark nights are perfect for viewing the northern lights.

The average annual rainfall / precipitation in Fairbanks is around 28 cm / 11 inches, and the average snowfall is around 178 cm / 70 inches.


The following are the normal daily temperature ranges for Fairbanks: