Enjoying a relatively central location in the state of Alaska and sited within the Tanana Valley, the city of Fairbanks serves as the seat of the Fairbanks North Star Borough. This is the biggest city within Alaska's interior and the state's second-biggest, after Anchorage.

The layout of Fairbanks has been greatly influenced by the very curvaceous Chena River, which roughly divides the city into north and south regions. Downtown Fairbanks resides in the southern section, while the northerly outskirts are where you will find a lengthy chain of hills, leading to the White Mountains.

Head directly to the south and you will reach the Tanana Flats, a vast area of swamp that stretches all the way to the Alaska Range. On a day with good visibility, it is quite possible to discern the distant mountains that make up the Alaska Range from Fairbanks, more than 100 miles / 161 km away.

Since Fairbanks is a relatively youthful city, founded at the very beginning of the 20th century, its downtown district is extremely organized and well-planned. Central east to west avenues are numbered in a logical order, while north to south roads are named, such as Barnette Street, Cushman Street, Lacey Street and Noble Street.

When using maps to find your way around central Fairbanks, look out for local landmarks such as the Ice Museum, the Alaska House Art Gallery, the UAF Community Technical College, the Noel Wien Public Library, Lathrop High School and the Clay Street Cemetery. Prominent hotels in the city center include the All Seasons, the Regency, SpringHill Suites and the Westmark. 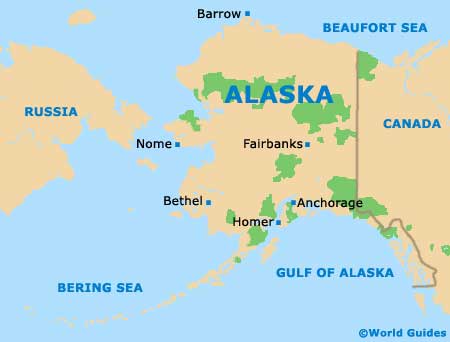 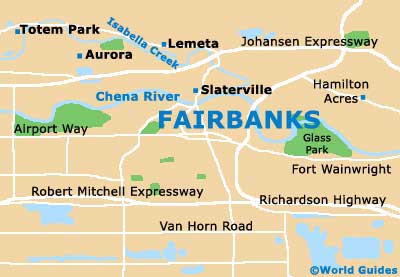