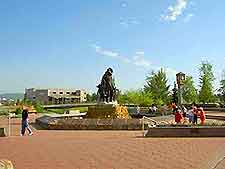 Located almost exactly in the center of Alaska, Fairbanks has played a prominent historic role in the state's development and economy, and features a number of notable districts and neighborhoods. The furthest north that most visitors to Alaska travel, Fairbanks retains its frontier pioneer character and there are plenty of attractions around the town that bring back to life the old Gold Rush days.

It's not all history though, with Fairbanks offering loads of modern facilities and entertainment venues, as well as being close to the magnificent wilderness of Denali National Park, nearby several hot springs, and a gateway to the Arctic Circle and beyond. 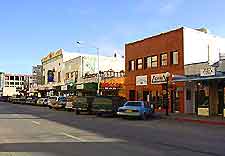 Downtown Fairbanks is without question the most lively district of the city. It is here that most of the best accommodation, restaurants, cafés and drinking establishments in Fairbanks are concentrated. Shopping is also best downtown, even if souvenir shopping is more varied at the numerous attraction gift shops. Each winter, spring and summer the Fairbanks downtown district hosts unique events such as the Ice Festival, various dog sled races, and the World Eskimo - Indian Olympics. Despite being a focus of the community, downtown Fairbanks has few after-hours nightclubs - for these you have to go near the university or out on the main highway. 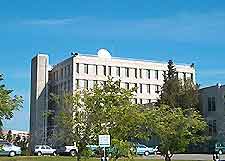 The alternative to Fairbanks' downtown district, the University of Alaska occupies a huge area in the town and takes up much of the hinterland. During the day you can visit a number of great attractions such as the museum, botanic gardens and Large Animal Research Station, while in the evening you can experience some of Alaska's best performing arts programs. There are year-round activities and festivals, and the Fairbanks university campus offers some great nightly entertainment.

Located on the way to the University of Alaska, College Road is where students hang out and eat and drink off-campus. The variety of restaurants here is wide, with lots of international cuisine mixing it with local fare. The cafés and pubs, too, have a much different character to those of the downtown Fairbanks, with themes catering to the younger generation.

When central Fairbanks closes down for the night, it's time for night owls to head out to the highways for late night and early morning entertainment. Along Parks Highway in particular, you will find some quality Fairbanks nightspots with great lively bands and vibrant music.