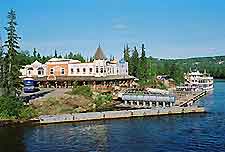 Fairbanks offers a good selection of hotels, motels, cabins, cottages, hostels and camping sites, with over 100 B&Bs in the city alone. Close to many of the area's main attractions, hotels in Fairbanks are more expensive within the downtown district, with accommodation becoming noticeably cheaper around the city's outskirts.

Hotels in downtown Fairbanks are concentrated on the eastern side of Cushman Street and along the banks of the scenic Chena River. Downtown accommodation can be more pricey, but offers the most convenient location in the city, close to shops, restaurants and general city life. Further hotels can be found near to the Fairbanks International Airport (FAI), lining stretches of the Airport Way and providing convenient lodging for business travelers dropping in for a meeting.

A number of hotels are located on the outskirts of Fairbanks and around nearby towns, cities and other destinations, such as Anderson, Nenana, Pleasant Valley, Salcha, Tok and the Denali National Park. The western border of Canada is also within driving distance of Fairbanks, although this journey can take at least a day. 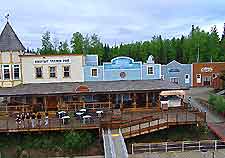 Cheap hotels, chain motels and inns provide some of the most reasonably-priced, reliable accommodation in Fairbanks, although the most inexpensive choices are often a fair distance from downtown.

Some of the main budget hotels in Fairbanks are located along the Airport Way, First Avenue, Hoselton Road, Old Airport Road, South Cushman Street, Tenth Avenue and the Wedgewood Drive. These include the Aspen Hotel, the Best Western Inn, the Pikes Waterfront Lodge, the Regency, the Springhill Suites and the Super 8 Motel.

Youth hostels in Fairbanks provide an alternative option for those looking for cheap accommodation and are particularly popular with backpackers. Notable hostels include Billie's Backpackers Hostel on Mack Road, which stands close to the main bus route, between the city center and the University of Alaska Fairbanks (UAF) campus. Other hostels include the North Woods Lodge along Chena Hills Drive, and Boyle's Hostel on 18th Avenue, on the southeastern side of the city.

More than a dozen well-equipped RV (Recreational Vehicle) parks and camping grounds surround the Fairbanks area, particularly in and around the nearby Denali National Park. Camping sites close by provide excellent value for money. The Chena River State Recreation Area can be found next to Fairbanks, along the banks of the Chena River and close to the University Avenue. Covering around 30 acres / 12 hectares, this park offers more than 60 camping sites in total. Also, the nearby tranquil Tanana Valley Campground, off College Road and next to the Alaska State Fairgrounds, is one of the area's most popular spots for campers and remains open from May to September. 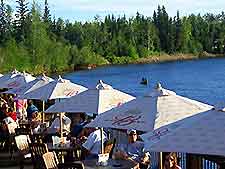 Mid-range and more upmarket accommodation is plentiful in central Fairbanks, ranging from family friendly lodging at guest houses and inns, to modern hotels with excellent facilities and services. Some of the most popular mid-range hotels in Fairbanks are situated on Birch Lane, the Chena Landings Loop, the Crest Drive, Eberhardt Road, Minnie Street, Noble Street and University Avenue. Highly recommended is the three-star Fairbanks Princess Riverside Lodge on Pikes Landing Road, which is near to the Chena River Seaplane Base.

Similarly priced three-star hotels include both the Springhill Suites by Marriott on 1st Avenue, and the downtown Westmark Hotel and Conference Center on Noble Street. Also of note is the Holiday Inn Express Fairbanks on Merhar Avenue, which stands alongside various shops and is just a short drive away from the Growden Memorial Park, Kiwanis Park and the Carlson Center - a large multi-purpose arena used for football, basketball and concerts.