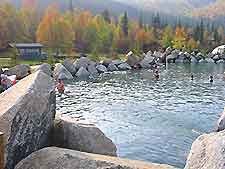 Considered to be the largest city in the Alaskan interior, Fairbanks has a rich history dating back to its founding in 1901 by Captain ET Barnette, a Yukon riverboat captain.

A riverside trading post was established, but it wasn't until the following year that people began to settle in earnest, when gold was discovered by Italian immigrant Felix Pedro. This influx of prospectors led to the first of many booms in the history of Fairbanks, and the following years saw the construction of important city buildings, some of which still stand to this day.

The first few years after the gold discovery were tough times for early settlers. Food shortages, a flood and a fire occurred, but residents showed resilience and completed the construction of the first church and hospital in 1905. St. Matthew's Episcopal Church burnt down in 1947, but it was rebuilt and remains one of the most important historical sites in the city today.


A Masonic temple was built in 1906 before being remodeled in 1916 and remaining virtually unchanged ever since. Another building which remains from this period is the RC Wood house, built in an early wooden-frame style as opposed to the more ubiquitous log home style.

The gold-mining history of Fairbanks is well-documented by the El Dorado Gold Mine, featuring a two-hour train tour through a mine, as well as demonstrations of mining work. The mine gives a good glimpse into the life of the earliest miners, before the boom began to turn into a bust from 1908. By 1920, the population of Fairbanks had dropped dramatically from 18,500 at its peak to just 1,100.

Although mining had become much more difficult, it continued until the start of WWII, when military activity and wartime construction created jobs for local residents. The following Cold War years meant that locals were involved in the establishment of missile sites and modern radar systems.

Flooding has been well-documented throughout the history of Fairbanks, but in 1967 the Chena River burst its banks and flooded the city overnight. This was a turning point in the city's flood management, forcing the construction of the Moose Creek Dam and other water diversion systems. The flood also gave a boost to the city's economy in the form of aid money and cheap loans for residents.

This 1968 oil discovery offered the population the opportunity to forget the stresses caused by the previous year's flooding. Many locals were involved in pipeline construction and they were joined by migrant workers who swelled the city's population. Today, the Fairbanks City Tour lasts for three hours and allows participants to view the Trans-Alaska pipeline that is still operational to this day.

The oil boom ended in 1978 and by 1979, local unemployment had hit 20 percent. However, another boom began in the early 1980s and the city has continued on this 'boom and bust' cycle ever since.

The booms have allowed Fairbanks to modernize and many streets are now indistinguishable from those in other destinations on the 'Lower 48'. However, many of the city's older log homes and framed houses remain, especially in the First Street district where Fairbanks was born.